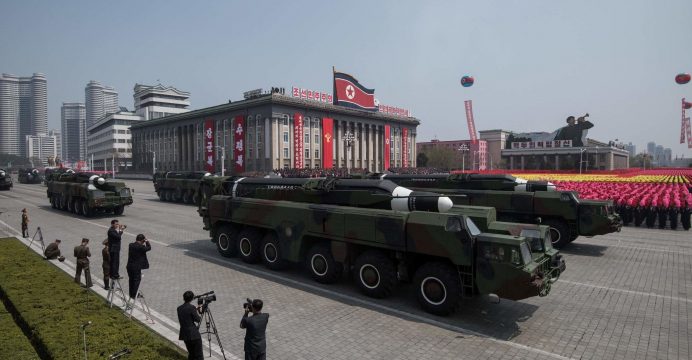 The latest missile test by North Korea, one of its furthest-reaching yet, has split world powers who united behind new UN sanctions just days ago.

The US said the burden of responding to the North should fall on China, its main ally, and Russia, which also has ties to the regime in Pyongyang.

But China suggested the US was shirking its own responsibility, while Russia condemned “aggressive” US rhetoric.

The missile fired over Japan had the range to hit the US territory of Guam.

It reached an altitude of about 770km (478 miles), travelling 3,700km past Japan’s northernmost island of Hokkaido before landing in the sea, South Korea’s military says.

It is the furthest any North Korean ballistic missile has ever travelled overground, Joseph Dempsey of the International Institute for Strategic Studies said in a tweet.

Key US ally South Korea responded within minutes by firing two ballistic missiles into the sea in a simulated strike on the North.

The UN Security Council will meet later on Friday in New York at the request of the US and Japan.

Japanese Prime Minister Shinzo Abe said his country would “never tolerate” such “dangerous provocative action”, and the US, China and Russia also condemned the test, coming as it did after the North’s nuclear bomb test on 3 September.

Russian President Vladimir Putin and his French counterpart Emmanuel Macron have called for a resumption of direct talks with Pyongyang to de-escalate the crisis, the Kremlin says.

On Monday, UN Security Council members voted unanimously to restrict oil imports and ban textile exports to North Korea in response to the nuclear test, which had violated UN resolutions.

However, US Secretary of State Rex Tillerson made clear Washington considered it was now up to Beijing and Moscow to act to restrain Pyongyang.

They “must indicate their intolerance for these reckless missile launches by taking direct actions of their own,” he said.

He said that China supplied North Korea with most of its oil, while Russia was the largest employer of North Korean forced labour.

Chinese foreign ministry spokeswoman Hua Chunying hit back by saying her country was not the “focal point of the conflict”.

“The various directly involved parties should take responsibility,” she told journalists, in remarks clearly aimed at the US and South Korea. “Any attempt to wash their hands of the issue is irresponsible and unhelpful for resolving the issue.”

She added that sanctions were “not the way to solve the problem” and called for a peaceful solution “through formal diplomatic means”.

Speaking on a Russian radio station, Russian foreign ministry spokeswoman Maria Zakharova said: “We are demonstrating not only our intolerance towards the illegal launches but also our willingness to settle the situation in the Korean peninsula.”

“Regrettably, aggressive rhetoric is the only thing coming from Washington,” she added.

The launch took place from the Sunan district of the capital Pyongyang just before 07:00 local time (22:00 GMT on Thursday), South Korea’s military says. Sunan is home to Pyongyang International Airport.