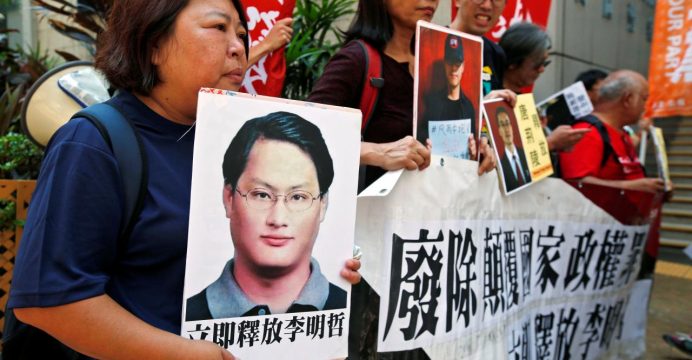 A Taiwanese activist on trial in China confessed on Monday to attempting to subvert the Beijing government, according to videos of his hearing released by Chinese authorities, although his wife refused to recognize the court’s authority.

Lee Ming-che, a community college teacher known for his pro-democracy and rights activism, went missing on a trip to mainland China in March. China’s authorities later confirmed that he was being investigated on suspicion of damaging national security.

Lee said he accepted the charge of subversion and expressed regret in videos of his comments released on social media by the Yueyang City Intermediate People’s Court in central Hunan province.

“I spread some attacks, theories that maliciously attacked and defamed China’s government, the Chinese Communist Party and China’s current political system, and I incited the subversion of state power,” Lee said, referring to comments written in an instant messaging group.

Taiwan’s presidential office said in a news briefing on Monday afternoon that the government is engaged in an “all-out effort to assist Mr. Lee Ming-che’s family.”

“His relief is our top priority. The position of this government has been very clear. Mr. Lee is one of our citizens,” an office spokesman said, adding: “We’ll do everything in our power to ensure his safe return.”

Lee stood trial alongside Chinese national Peng Yuhua, 37, who confessed to creating instant messaging groups and founding an organization that sought to promote political change in China. Lee had been involved in both, Peng said in testimony released on video by the court.

Taiwanese rights activist Xiao Yiming traveled to the mainland for the trial, but said he was barred from entering the courtroom.

Xiao suspected Peng was being used by authorities to help strengthen the state’s case against Lee, as he was unaware of any previous connection between the two men.

“Taiwan has democratic freedoms and Lee has the right to share his ideas,” Xiao told Reuters by phone, describing Lee as a “prisoner of conscience”.