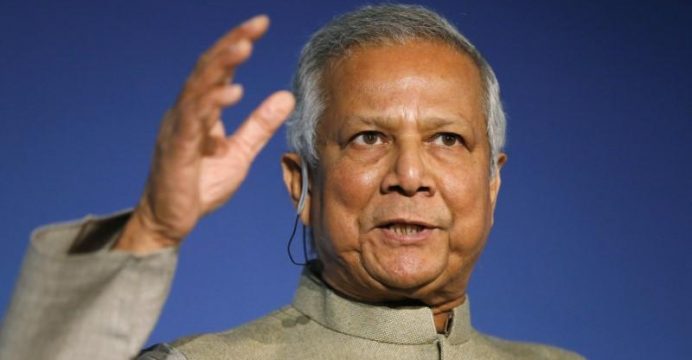 In an open letter to the UN Security Council, Prof Yunus argued that the ‘human tragedy and crimes against humanity had taken a dangerous turn in the Arakan region of Myanmar’ (earlier known as Burma) that deserves immediate high-level interventions with an aim to bring end to a humanitarian crisis and build peace in the region.

“According to different organizations, recent military offensive by the Myanmar Army in Rakhine State has led to the killing of hundreds of Rohingya people. Hundreds of thousands of people have been displaced,” said the letter of Prof Yunus adding that complete villages have been burned, women raped, many civilians arbitrarily arrested, and children killed.

Crucially, humanitarian aid organizations have been denied access, creating an appalling humanitarian crisis in an area already extremely poor. According to local administration sources, around 120,000 people fled to Bangladesh during the last twelve days. Human misery created by such massive displacement of men, women, and children under the threat of death is getting worse every day, it added.

“Along with several Nobel laureates and eminent global citizens, I denounced the previous spate of violence late last year and wrote to you to intervene. Despite initiatives taken by you, the situation has not improved,” said Prof Yunus adding that the UNSC should ‘take decisive actions to stop the violence against innocent civilians and bring permanent peace in Rakhine’.

“I request you to take immediate action for the cessation of indiscriminate military attack on innocent civilians that is forcing them to leave their home and flee the country to turn into stateless people,” stated the letter of the ‘banker to the poor’.

The creator of the unique concept of social business model, Prof Yunus strongly urged the UNSC ‘to persuade Myanmar government to take immediate steps to implement the recommendations of the Rakhine Advisory Commission (RAC), which the Myanmar government established in 2016 under the pressure of international community’.

“The Myanmar government needs to be told that international support and finance is conditional on a major change in policy towards the Rohingya. Propaganda & incitement of hatred and all violence, particularly State violence against Rohingyas must stop, discriminatory laws & policies must go and the recommendations of Kofi Annan’s commission must be implemented immediately,” asserted Prof Yunus.

Decades of persecution appears to be breeding radicalization which the Commission, rightly apprehended. The fear became reality through the attack on Myanmar security forces by the militants. Unless constructive effort to build lasting peace is taken, the situation will get worse which in turn may pose a serious security threat to the neighboring countries, added the letter.