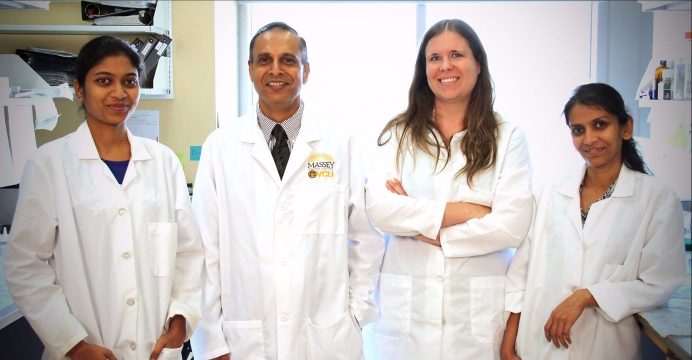 A Bangladeshi researcher’s commitment to a cure for liver cancer

When Devanand Sarkar, M.B.B.S., Ph.D., came to VCU Massey Cancer Center in 2008, he wanted to pursue a new direction in his research. Driven by the loss of his close friend and colleague, Sarkar has been on a mission to better understand the processes that drive the development of liver cancer.

Dr. Devanand Sarkar’s ground breaking research that uncovered the mechanism of development of liver cancer is now in the spotlight once again. His new research is close to bringing about new treatments for liver cancer.

Dr. Sarkar and his colleagues had originally discovered and cloned AEG-1 gene which was overexpressed in liver cancer and made cancer cells resistant to chemotherapy. His team also discovered another gene called SND1 which also promotes liver cancer. After discovering the mechanism, he developed therapeutic approach including nanoparticle-based therapy and other drugs that successfully blocked both of these genes in a mouse model.

His research also uncovered the link between obesity and liver cancer. Obesity leads to the deposition of fat in the liver called fatty liver disease which causes chronic inflammation and eventually develops into liver cancer.

“It started with this gene, AEG-1,” remembers Sarkar, who is the associate director for education and training at Massey, holds the Harrison Foundation Distinguished Professorship in Cancer Research and is a member of Massey’s Cancer Molecular Genetics research program.

In a study published in the Journal of Clinical Investigation in 2009, Sarkar demonstrated that AEG-1 was overexpressed in hepatocellular carcinoma (HCC), the most common form of liver cancer, and outlined some of the molecular mechanisms associated with the gene. This was also the year that Sarkar’s friend and colleague, Zao-zhong Su, Ph.D., was diagnosed with liver cancer.

“I worked closely with Dr. Su for 7 years in New York before we both came to VCU,” said Sarkar, who is also an associate professor in the Department of Human and Molecular Genetics at the VCU School of Medicine and the associate scientific director, Cancer Therapeutics, at the VCU Institute of Molecular Medicine.

“He passed away 2 years after he was diagnosed. I might have moved on to other things, but his loss was a very personal experience and it kept me focused on the disease.”

By the time Dr. Su passed away, Sarkar was beginning to show some of the ways in which AEG-1 interacted with other molecules to drive the development of liver cancer.

In a 2011 study published in the journal of Hepatology, Sarkar’s team discovered that AEG-1 worked with another gene called SND1 to increase the function of RNA-induced silencing complex (RISC), thereby promoting HCC. This pre-clinical study clearly identified SND1 as a novel regulator of liver cancer and a promising target for future therapies. But Sarkar needed to move beyond in vitro studies in the lab to better understand all of the ways in which AEG-1 and SND1 caused liver cancer.

Dr. Sarkar is currently an Associate Professor in the Department of Human and Molecular Genetics and the Associate Director of Education and Training at Massey Cancer Center, Virginia Commonwealth University, USA. He holds numerous prestigious awards including The Harrison Foundation Distinguished Professorship in Cancer Research. He graduated from Dhaka Medical College and a Ph.D. from Japan. He moved to the USA thereafter and did his Post doctoral fellow in Oncology/Virology, Departments of Pathology and Urology, Columbia University, New York.

Dr. Sarkar’s ultimate goal is to bring a combination of therapies that offer patients the best chance of beating liver cancer, a potentially aggressive cancer that costs the lives of millions in the world.