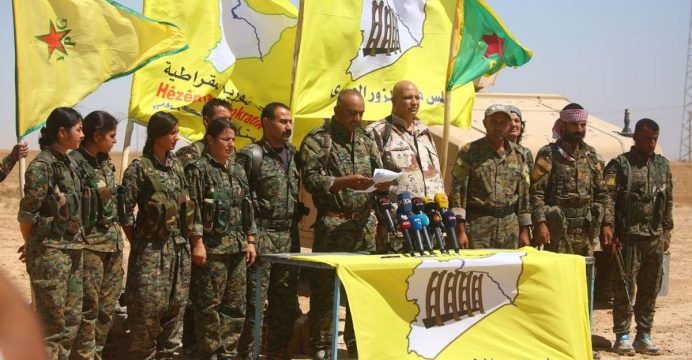 Syrian government forces and U.S.-backed militias converged on Islamic State in separate offensives against the militants in the eastern Syrian province of Deir al-Zor on Sunday.

The U.S.-backed Syrian Democratic Forces alliance of mostly Kurdish and Arab militias (SDF) said it had reached Deir al-Zor’s industrial zone, just a few miles to the east of the city after launching operations in the area in recent days.

The Syrian army and its allies, backed by Iran and by Russian air cover, meanwhile advanced from the west to seize full control of the Deir al-Zor-Damascus highway, a Hezbollah-run media unit reported.

The Syrian Observatory for Human Rights monitoring group said at least 17 civilians had been killed by Russian air strikes in Deir al-Zor on Sunday.

The attacks squeezed Islamic State in its last major Syria stronghold in areas near the border with Iraq. The group has come under pressure since losing its de facto capital Mosul in Iraq this year and is surrounded by the SDF in Raqqa, its former Syria bastion.

The jihadist group still holds much of Deir al-Zor province and half the city, as well as a pocket of territory near Homs and Hama further west, however, and is mounting counter-attacks.

Sunday’s advances mean that U.S.-backed forces and the Syrian government side, boosted by Russian military support, are separated only by about 15 km (10 miles) of ground and the Euphrates River in Deir al-Zor.

Much of northeast Syria to the east of the Euphrates is held by the SDF, which is dominated by the Kurdish YPG militia. The Syrian government and its allies are increasingly capturing the remaining areas Islamic State holds to its west.

Government troops linked up with forces already in Deir al-Zor at the Panorama entrance to the city, bringing the whole road under their control for the first time in years, the Hezbollah media unit reported.

The Syrian army and its Iran-backed allies, which include Lebanese Hezbollah, this week broke a three-year siege by the jihadists of a government-held enclave in Deir al-Zor and an adjacent air base.

Syrian state TV broadcast footage of Syrian officers who had been holed up in Deir al-Zor emotionally greeting their superiors after being surrounded by IS since 2014.

The United Nations estimates that some 93,000 people were living in “extremely difficult” conditions in government-held parts of Deir al-Zor, supplied by air drops to the air base.

Syrian government forces and their allies have been able to turn their attention to the fight against Islamic State in eastern Syria after recapturing many areas in the west from rebels.