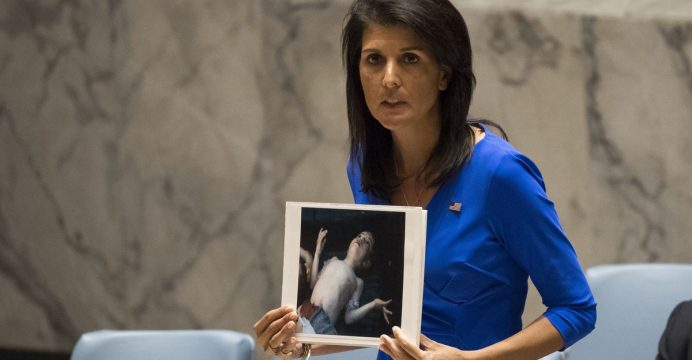 The Syrian government has denied a U.N. report accusing it of a sarin attack in April that killed scores of people, state media said on Friday.

Damascus sent the United Nations a letter “asserting that Syria has not and will not use toxic gases against its people because it does not have them in the first place”, state news agency SANA said.

The U.N. Commission of Inquiry on Syria said a government warplane dropped sarin on Khan Sheikhoun in insurgent-held Idlib province in April, killing more than 80 civilians. The attack prompted a U.S. missile strike on a Syrian government air base.

A fact-finding mission of the Organisation for the Prohibition of Chemical Weapons (OPCW) previously identified the attack as containing sarin, an odorless nerve agent. But that conclusion did not assign blame.

The Syrian government has said before that air strikes in the town of Khan Sheikhoun hit a weapons depot belonging to rebel factions. The U.N. investigators dismissed this.

President Bashar al-Assad’s government has repeatedly denied using chemical weapons in the war and says it only targets militants.

In 2013, hundreds of civilians died in a sarin gas attack in the suburbs of the capital Damascus, in an attack that Western states blamed on Assad’s government. Damascus blamed rebels.

In the wake of the atrocity, the United States and Russia brokered a deal under which Syria joined the international Chemical Weapons Convention. Syria declared it had 1,300 tonnes of chemical weapons or industrial chemical stocks, surrendering it to the international community for destruction.

U.N.-OPCW investigators have said that the government continued to use chlorine, which is widely available and hard to trace. Chlorine is not a banned substance, but the use of any chemical is banned under the 1997 Chemical Weapons Convention.

A series of U.N.-OPCW investigations found that various parties in the war have used chlorine, sulfur mustard gas and sarin.