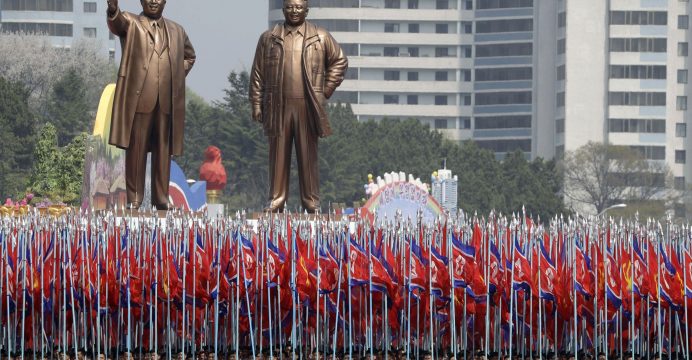 South Korea braced for a possible further missile test by North Korea when it marks its founding anniversary on Saturday, just days after its sixth and largest nuclear test, which it marks each year with a big display of pageantry and military hardware.

Throughout the week, South Korean officials have warned the North could launch another intercontinental ballistic missile, in defiance of U.N. sanctions and amid an escalating standoff with the United States.

Tension on the Korean peninsula has escalated as North Korea’s young leader, Kim Jong Un, has stepped up the development of weapons, testing a string of missiles this year, including one flying over Japan, and conducting its sixth nuclear test on Sunday.

Experts believe the isolated regime is close to its goal of developing a powerful nuclear weapon capable of reaching the United States, something Trump has vowed to prevent.

South Korean nuclear experts, checking for contamination, said on Friday they had found minute traces of radioactive xenon gas but that it was too early to link it to Sunday’s explosion.

The Nuclear Safety and Security Commission (NSSC) said it had been conducting tests on land, air and water samples since shortly after the North Korean nuclear test on Sunday.

Xenon is a naturally occurring, colorless gas that is used in manufacturing of some sorts of lights. But the NSSC said it had detected xenon-133, a radioactive isotope that does not occur naturally and which has in the past been linked to North Korea’s nuclear tests.

There was no chance the xenon “will have an impact on South Korea’s territory or population”, the agency said.

U.S. President Donald Trump has repeatedly said all options are on the table in dealing with North Korea and on Thursday said he would prefer not to use military action, but if he did, it would be a “very sad day” for North Korea.

“Military action would certainly be an option. Is it inevitable? Nothing is inevitable,” Trump told reporters. “If we do use it on North Korea, it will be a very sad day for North Korea.”

Even as Trump has insisted that now is not the time to talk, senior members of his administration have made clear that the door to a diplomatic solution is open, especially given the U.S. assessment that any pre-emptive strike would unleash massive North Korean retaliation.

North Korea says it needs its weapons to protect itself from U.S. aggression and regularly threatens to destroy the United States.

South Korea and the United States are technically still at war with North Korea after the 1950-53 Korean conflict ended with a truce, not a peace treaty.