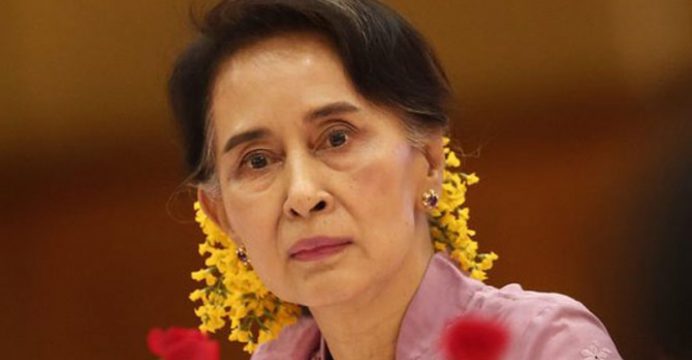 Myanmar leader Aung San Suu Kyi has come under pressure from countries with large Muslim populations including Bangladesh, Indonesia and Pakistan to halt violence against Rohingya Muslims after nearly 125,000 of them fled to Bangladesh.

Reuters reporters saw hundreds of exhausted Rohingyas arriving on boats near the village of Shamlapur in Bangladesh near the Myanmar border. The village, facing the Bay of Bengal, appears to have become the newest receiving point for the refugees after authorities cracked down on human traffickers in a different part of the Teknaf peninsula.

Indonesian foreign minister Retno Marsudi was due in the Bangladeshi capital, Dhaka, on Tuesday after meeting the Nobel peace laureate and army chief Min Aung Hlaing to urge that Myanmar halt the bloodshed.

“The security authorities need to immediately stop all forms of violence there and provide humanitarian assistance and development aid for the short and long term,” Retno said after her meetings in the Myanmar capital.

The latest violence in Myanmar’s northwestern Rakhine state began on Aug. 25, when Rohingya insurgents attacked dozens of police posts and an army base. The ensuing clashes and a military counter-offensive have killed at least 400 people and triggered the exodus of villagers to Bangladesh.

The treatment of Buddhist-majority Myanmar’s roughly 1.1 million Muslim Rohingya is the biggest challenge facing Suu Kyi, who has been accused by Western critics of not speaking out for the minority that has long complained of persecution.

Myanmar says its security forces are fighting a legitimate campaign against “terrorists” responsible for a string of attacks on police posts and the army since last October.

Myanmar officials blamed Rohingya militants for the burning of homes and civilian deaths but rights monitors and Rohingya fleeing to neighboring Bangladesh say the Myanmar army is trying to force them out with a campaign of arson and killings.

“Indonesia is taking the lead, and ultimately there is a possibility of ASEAN countries joining in,” H.T. Imam, a political adviser to Bangladesh Prime Minister Sheikh Hasina, told Reuters.

He was referring to the 10-member Association of South East Asian Nations that groups both Myanmar and Indonesia.

“If we can keep the pressure on Myanmar from ASEAN, from India as well, that will be good.”

Indian Prime Minister Narendra Modi begins a visit to Myanmar later on Tuesday, during which he will meet top officials, including Suu Kyi.

Turkey called the violence against the Rohingya “genocide” and offered Bangladesh help with the refugee influx. Pakistan, home to a large Rohingya community, has expressed “deep anguish” and urged the world body, the Organization of Islamic Countries, to act.