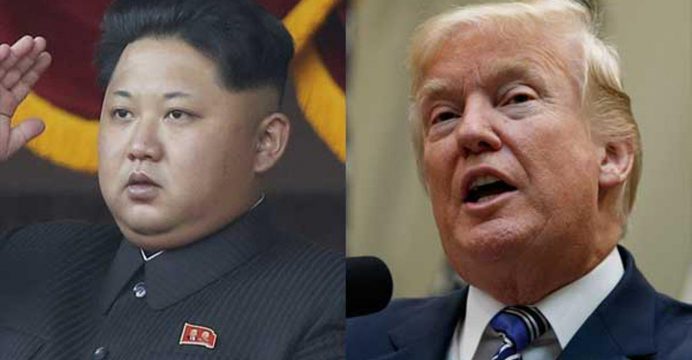 North Korea conducted its sixth and most powerful nuclear test on Sunday, which it said was an advanced hydrogen bomb for a long-range missile, marking a dramatic escalation of the regime’s stand-off with the United States and its allies.

The test drew swift international condemnation, including from U.S. President Donald Trump, who described North Korea as a “rogue nation” and said its actions “continue to be very hostile and dangerous to the United States”.

“South Korea is finding, as I have told them, that their talk of appeasement with North Korea will not work, they only understand one thing!” Trump said in an early morning tweet.

The White House said Trump would convene a meeting of his advisers later on Sunday.

Chinese President Xi Jinping and Russian President Vladimir Putin, who met on the sidelines of a BRICS summit in China, agree to “appropriately deal” with the North Korean nuclear test, the Xinhua news agency reported.

Hours before the test, Trump had talked by phone with Japanese Prime Minister Shinzo Abe about the “escalating” nuclear crisis in the region.

The U.S. president has previously vowed to stop North Korea developing nuclear weapons and said he would unleash “fire and fury” on the regime if it threatened U.S. territory.

Last week Trump said the time for talking was over, although he was later contradicted by his defense secretary, James Mattis, who said the United States had not exhausted all diplomatic options.

Trump’s tweet on Sunday, however, again suggested that he favors a non-diplomatic solution. The big question now is whether advisers like Mattis and Secretary of State Rex Tillerson can persuade him not to be too hasty in ruling out diplomacy.

North Korea, which carries out its nuclear and missile programs in defiance of United Nations Security Council resolutions and sanctions, said on state television that the hydrogen bomb test ordered by leader Kim Jong Un had been a “perfect success”.

The bomb was designed to be mounted on its newly developed intercontinental ballistic missile (ICBM), the North said.

The test had registered with international seismic agencies as a manmade earthquake near a test site in the North. Japanese and South Korean officials said it was around 10 times more powerful than the tremor picked up after North Korea’s last nuclear test a year ago.

There was no independent confirmation that the detonation was a hydrogen bomb, rather than a less powerful atomic device, but Japan’s Chief Cabinet Secretary Yoshihide Suga said Tokyo could not rule out such a possibility.

Experts who studied the impact of the earthquake caused by the explosion – measured by the U.S. Geological Survey at magnitude 6.3 – said that there was enough strong evidence to suggest the reclusive state has either developed a hydrogen bomb or was getting very close.

The head of the U.N.’s nuclear watchdog, IAEA Director General Yukiya Amano said the nuclear test was “an extremely regrettable act” that was “in complete disregard of the repeated demands of the international community”.

The United States has repeatedly urged Beijing to do more to rein in its neighbor, but Beijing has lambasted the West and its allies in recent weeks for suggesting that it is solely responsible for doing so. It has said military drills by South Korea and the United States on the Korean peninsula have done nothing to lessen tensions.