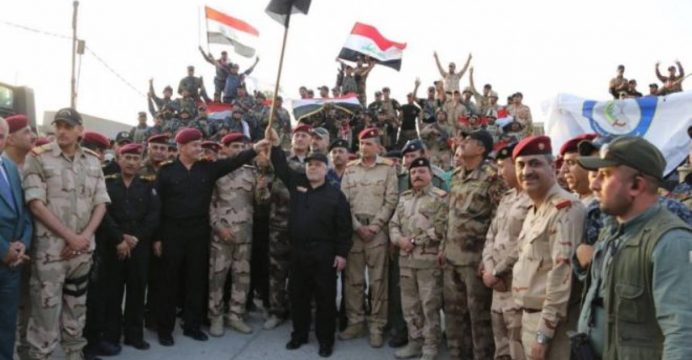 Tal Afar became the next target of the U.S.-backed war on the jihadist group following the recapture of Mosul, where it had declared its “caliphate” over parts of Iraq and Syria in 2014. Mosul is the capital of Nineveh province.

“Tal Afar has been liberated,” Abadi said in a statement. “We say to the Islamic State fighters: wherever you are, we are coming for you and you have no choice but to surrender or die.”

Iraqi forces had been waiting to clear the small town of al-’Ayadiya, 11 km (7 miles) northwest of Tal Afar, before declaring complete victory in the offensive. Islamic State militants had retreated to the town.

However, pockets of resistance remained and Iraqi forces were still working to clear the remaining militants from the town.

“We have to make sure that no more terrorists remain hiding inside the town’s houses,” army Lieutenant Colonel Salah Kareem told Reuters.

Hundreds of additional troops were sent into al-’Ayadiya on Wednesday, as Iraqi forces came under increasing pressure to clear Islamic State fighters from their final position in the group’s former stronghold.

Iraqi forces had faced an unexpectedly tough battle in al-’Ayadiya, fighting house-to-house in the center of town.

They had come under pressure from top commanders to finish the offensive before the start of the Muslim holiday of Eid, which begins on Thursday evening.