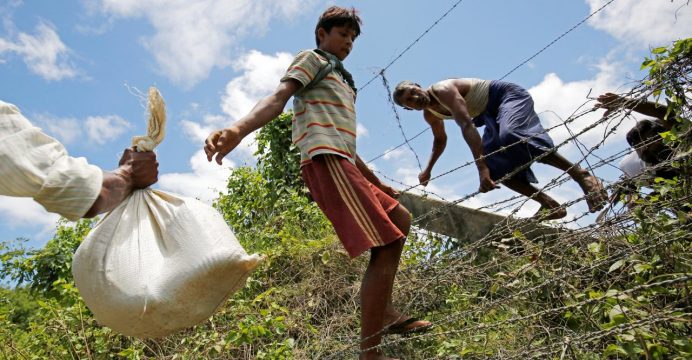 Rohingya Muslims fleeing to Bangladesh from escalating fighting in Myanmar face the growing danger of sickness and attempts by the Bangladesh authorities to send them home, despite a United Nations plea that they be allowed to seek shelter.

A series of coordinated attacks by Rohingya insurgents on security forces in the north of Myanmar’s Rakhine state on Friday has triggered a fresh exodus to Bangladesh of villagers trying to escape the violence.

At least 109 people have been killed in the clashes in Myanmar, most of them militants but including members of the security forces and civilians, reports Reuters

Bangladesh’s border guards are trying to block the Rohingya from entering the country and send back those who have made it across the frontier.

Border guards told Reuters they had sent about 550 Rohingya back across the Naf river that separates the two countries since Monday, despite an appeal by U.N. Secretary-General Antonio Guterres for Dhaka to allow Rohingya to seek safety.

Bangladesh is already host to more than 400,000 Rohingya refugees who have fled Buddhist-majority Myanmar since the early 1990s and Dhaka has insisted it could not accept any more.

Still, an estimated 5,000 people have been able to cross into Bangladesh over the past few days, most slipping in at night over the land border.

Some 4,000 more, however, are stranded in the no man’s land between the two countries near Taung Bro village, where temporary shelters stretched for several hundred meters on a narrow strip between the Naf river and Myanmar’s border fence.

Reuters reporters at saw women, some carrying children and the sick, fording the river, which at that location is less than 10 metres wide. Bangladeshi border guards permitted about half a dozen people at a time to cross to access a pile of donated medicines.

“We came here out of fear for our lives, but we can’t cross. So we don’t know what to do,” said Aung Myaing, from Taung Bro Let Way village, standing knee-deep in the river.

He said the military and ethnic Rakhine Buddhists were looting and setting fires to their villages, including by using grenade launchers.

When asked about insurgents he said: “We didn’t see them, we have no relation to them. But Myanmar doesn’t distinguish between the terrorists and civilians. They are hunting all the Rohingya.”