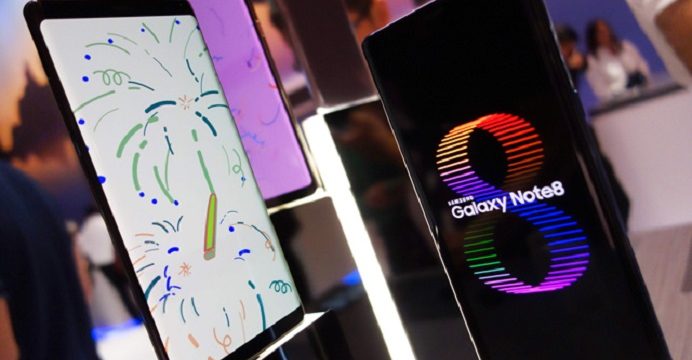 Samsung unveiled a new model of its Galaxy Note

Samsung on Wednesday unveiled a new model of its Galaxy Note as it seeks to leave behind the debacle over exploding batteries in the previous generation of the device, and mount a renewed challenge to Apple and its soon-to-come iPhone 8.

Introducing the Note 8 “phablet” at an event in New York City, executives repeatedly thanked fans who had remained loyal to the device, reports BSS.

“None of us will ever forget what happened last year,” said Samsung president of mobile communications business DJ Koh.

“But, I will never forget how millions of dedicated Note loyalists stayed with us; so let me express my deepest gratitude.”

The South Korean giant laid claim to being the first smartphone maker to field a “phablet” device — combining features of smartphones and tablets — when it introduced the first Note five years ago.

Samsung did not disclose the price of the Note 8, which will hit shops on September 15 but will be available for pre-orders starting on Thursday.

Note 8 features include dual cameras on the back, with improved image capabilities, and a signature “S Pen” for drawing or writing on touch screens.

“All in all, it was a good day for Samsung,” Moore Insights and Strategy analyst Patrick Moorhead said at the event.

“The Note 7 is clearly behind them and now it’s onto the future with the Note 8.”

The analyst depicted the Note 8 as Samsung’s best opportunity in years to gain market share in the fiercely competitive premium smartphone market.

The Note 8 debut comes on the heels of Samsung launching new Galaxy 8 smartphones, and as the South Korean consumer electronics giant and fellow market leader, Apple seeks wow factors that can help them fend off challenges from rising Chinese-based manufacturers.

Apple is under particular pressure to dazzle as the culture-changing California iPhone maker looks for a way to maintain its image as an innovation leader in a global market showing signs of slowing.

Apple is expected to unveil a 10th-anniversary version of the iPhone in September.

Reports say the new iPhone will include a high-quality, edge-to-edge screen with a notch in the top for an extra camera supporting 3D facial recognition. Some speculate that the back of the new handset will be glass and will offer wireless charging.

Meanwhile, Google-made Pixel smartphones that debuted last year will likely get a second generation in the months ahead.

Global smartphone sales saw a modest decline of 0.8 percent in the second quarter of 2017, an IDC survey showed.

Samsung maintained top spot in the crowded field with a 23.3 percent market share, while Apple held onto second place with 12 percent, according to IDC.

“Samsung had the Note 7 debacle, but it appears their troubles are behind them,” GlobalData analyst Avi Greengart told reporters. “Samsung is doing some amazing things with its display and design.”

Note 8 handsets boasted “infinity” screens that span edge-to-edge on handsets, to enhance the viewing of video or help to juggle multiple tasks.

Samsung said it also built its Bixby virtual assistant smarts into Note 8 as it battles to compete with artificial intelligence being meshed into handsets powered by Apple or Google-backed Android software. Note 8 also boasted water and dust resistance, along with wireless charging capability.

“We appreciate the relentless passion of the Note community,” Koh said during a presentation focused almost as much on Note fans as it was on the new handset.

“They’ve been a constant inspiration to us, and we designed the new Note for them.”

In an interview with CNBC, Koh confirmed that Samsung is working on a smart speaker infused with Bixby smarts that will take on home assistant devices fielded by Amazon, Google and Apple.