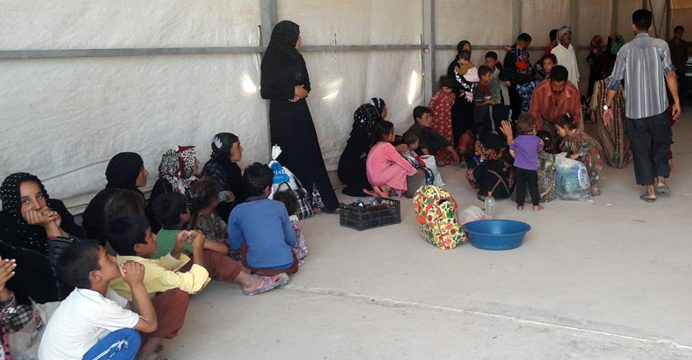 IOM, the UN Migration Agency’s emergency teams are responding to thousands of civilians fleeing Talafar since the launch of the military campaign to retake the city from ISIL on 20 August.

In cooperation with the Government of Iraq and humanitarian partners, IOM is directly delivering medical assistance, non-food items (NFI) and shelter to vulnerable displaced people from Talafar, most of whom had to walk for hours in arduous conditions before reaching safe areas. Many of the displaced people from Talafar arrive exhausted and in poor health, often with critical levels of malnutrition among children, some unable to move. Within the past four days (since 18/08) around 1,500 individuals have been received at IOM’s Haj Ali emergency site, and more than 1,700 individuals have also been received at Qayara emergency site; both sites are about 60 km south of Mosul. Thousands more are expected to flee in the coming days. These internally displaced persons (IDPs) carried a minimal amount of clothes; some only had what they wore, some were partially clothed. Haj Ali emergency site is expected to accommodate additional new IDPs as several camps in the area are at full capacity. Civilians fleeing Talafar who arrive at military checkpoints and mustering points are bussed by government authorities to areas including Hammam al-Alil, before being transported to camps and emergency sites. A total of 17 recent IDPs from Talafar have been brought to IOM’s field hospital in Hammam al-Alil, some requiring major surgery. Many cases are traumatic injuries, including fractured limbs sustained as a result of the conflict. From the Haj Ali site, the most serious cases were transported to Qayara hospital by IOM ambulance.