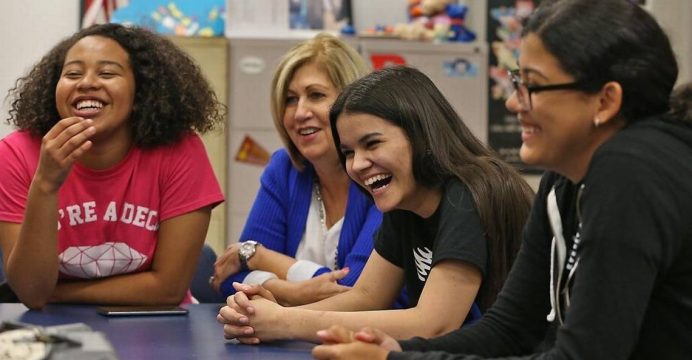 GCSE passes have dropped slightly across the range of subjects, with some dramatic changes in new, tougher exams sat for the first time in England.

Overall in England, Wales and Northern Ireland, passes (grades C/4 and above) dropped 0.6 percentage points to 66.3%.

But the exams regulator Ofqual says a pass or grade 4 in maths would have been achieved in the upper tier paper with just 18% of the overall marks.

There has been a particular focus on this maths GCSE, with many students posting concerns online about the exam after they sat it.

Ofqual explained the higher tier paper caters for more able students and starts with with grade 4 level questions, adding that the lower pass mark reflected this.

Exam boards insist that standards have been held steady, despite complaints by some students and teachers about a lack of textbooks and practice papers.

They explained the fall in the pass rate for the English literature GCSE in England by saying this year’s cohort had had slightly lower prior attainment.

The proportion of entries receiving the top grades (A/7 or above) has also fallen, to 20%, down 0.5 percentage points on last year. This is the lowest since 2007, when the figure was 19.5.

Half a million pupils are getting their results, amid a switch to a new numerical grading system and tougher exams in England.

In each of the three new O-level-style GCSE subjects – English, English literature and maths – a new top grade 9 has been created.

Some 3.2% of papers were awarded this grade in English literature, 2.2% in English language and 3.5% in maths.

Exam boards revealed that 2,000 extremely able candidates got a 9 in all three new exams. There were 50,000 grade 9s overall – two-thirds of which were girls.

The regulator said the percentage of passes would be kept the same as under the old system, in the interest of fairness, but some experts say the new exams are the toughest since the late 1980s.

Others have complained the new 9 to 1 grading system would be confusing for parents, admissions tutors and employers.

Under this system, an A is equivalent to a 7 while a C is anchored at the bottom of a grade 4.

The reason for introducing three bands – 7 to 9 – instead of just A* and A at the top end – was to give more detail about the highest-achieving candidates.

This year’s GCSE candidates in England, about 90% overall, are the first to sit the exams after the changes pushed by former Education Secretary Michael Gove.

He highlighted that more than 50,000 top 9 grades had been awarded across the new GCSEs and more than two-thirds of entries had secured at least a standard pass.