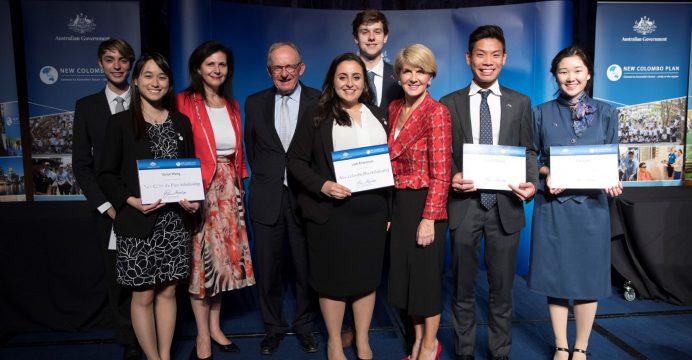 29 Australian students to study in Bangladesh under New Colombo Plan

Twenty nine Australian students will come to study in Bangladesh next year under the ‘New Colombo Plan’, an initiative of Australian Foreign Minister Julie Isabel Bishop.

Under the ‘New Colombo Plan’, Australian government provides scholarship to several hundred Australian students to study in Asia and the Pacific countries.

Mahmood Ali, who is currently in Perth leading a six-member Bangladesh delegation to the Bali Process Government and Business Forum, welcomed the decision and thanked his Australian counterpart for her continued support in this area.

During the half an hour meeting, the two leaders discussed a wide range of issues of mutual interest.

Expressing gratitude to Australia for recognizing Bangladesh as early in January 1972, Mahmood Ali recalled the contribution of William Ouderland, an Australian citizen from Perth, to Bangladesh’s Great War of Independence.

Ouderland was the only foreign citizen to have been awarded “Bir Proteek”, the fourth highest gallantry award of Bangladesh.

Terming the bilateral relations between Bangladesh and Australia as excellent, the Australian foreign minister thanked Mahmood Ali for Bangladesh’s support to Australia’s bid for the Human Rights Council membership.

In response, the Bangladesh foreign minister conveyed Bangladesh’s appreciation for Australia’s continued support in the country’s human resources development and capacity building including in combating terrorism and countering violent extremism.

He also sought her support in promoting cultural diplomacy between the two countries.

Foreign Minister Bishop assured her Bangladesh counterpart of extending all possible supports in this area, including the possibility of forming Australia-Bangladesh Cultural Council.

Noting the Forum to be an excellent initiative, Ali commended the Australian foreign minister for her leadership in engaging the private sector in combating modern slavery and human trafficking.

In response to Foreign Minister Mahmood Ali’s invitation, the Australian foreign minister expressed her interest to visit Bangladesh at a mutually convenient time.

Bangladesh High Commissioner to Australia Kazi Imtiaz Hossain was present during the meeting.