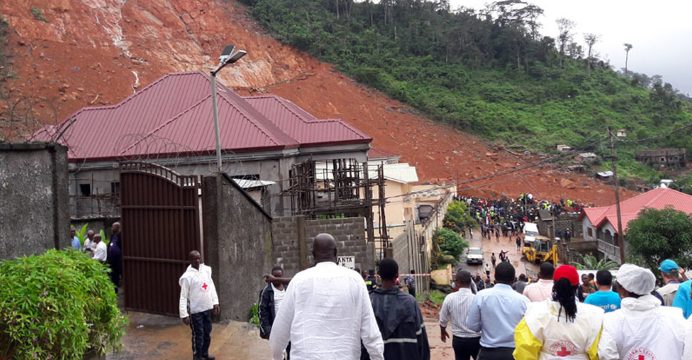 More than 300 people have died with hundreds more still missing following severe mudslides and floods in Sierra Leone’s capital, according to the Office of National Security (ONS). Two districts have been affected: Freetown (eastern and western outskirts) and Bo district.

Inter-agency rapid assessments conducted by five different teams including IOM, the UN Migration Agency, in 16 communities on Tuesday (15/08) are indicating that around 1,100 households are directly affected (approximately 4,000 people). These are still preliminary figures to be confirmed by further assessments.

“The Disaster Management Department of ONS is in charge of the overall coordination and response, with military and police involved in rescue operations in affected areas,” said Langumba Keili, the director of ONS. “The death toll is expected to continue to rise over the next few days and weeks, as emergency teams search through the debris and mud.” Communications and electricity have been disrupted, and extensive damage has been done to roads, infrastructure and houses. The full extent of the damage is still being assessed. Further mudslides from Sugar Loaf Mountain, at the base of which Freetown sits, due to forecasted heavy rains could lead to further disasters.

“Access to safe water and health services, as well as widespread displacement are expected to be immediate concerns for thousands of people,” said Sanusi Savage, IOM Sierra Leone Chief of Mission. “We will do everything to reach affected communities and give aid to vulnerable people. The longer we wait to respond, the higher the risk of epidemic disease outbreaks or Acute Watery Diarrhoea are due to contaminated water sources.”

IOM, as a member of the UN Country Team, and humanitarian partners, including the Red Cross, have mobilized and are supporting ONS. After learning of the mudslide and the floods, IOM immediately committed to enhancing its emergency relief in the country including through the use of funds from the Government of Japan. The activities planned with this funding are emergency assistance to the people affected by the mudslide and the floods and through distributions of core relief items, including emergency shelter kits. IOM and ONS have agreed upon a standard shelter and kitchen set to be distributed to families whose houses were destroyed by the floods. IOM is deploying an Information Management expert on Sunday (20/08) to support the Government in data collection, coordination and analysis.

Prior to the floods, IOM had been supporting national authorities and local organizations in Sierra Leone through capacity building in disaster preparedness, displacement management and data collection. The Government and humanitarian partners are registering survivors, and those who have lost family members. Red Cross volunteers are also digging for missing persons and supporting distraught families. The World Food Programme is distributing food. The Ministry of Health and Sanitation requested a series of health items to be delivered at the Central Medical Store in Freetown in order to respond to the urgent medical needs, which IOM has started to send. IOM has distributed gloves, aprons, face masks, gowns, chlorine, and liquid soap, among others.

The Sierra Leonean Government leads the response and is working with international organizations to fill in the gap in available resources. The Government has clearly indicated to partners that it will need urgent support and assistance in responding to the disaster to avert further human suffering. Currently, a public health preparedness plan is being developed by the Government and health partners in order to adequately respond to potential outbreaks of cholera and other water-borne diseases. There is also a plan being developed to train community health workers on Water, Sanitation and Hygiene (WASH) and water-borne disease surveillance.