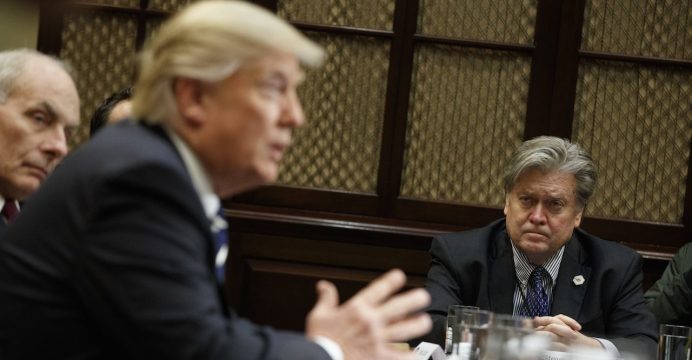 Bannon was a force behind some of Trump’s most contentious policies, including a travel ban on people from several Muslim-majority nations, and has fought with more moderate factions inside a White House riven with rivalries and back-stabbing, reports Reuters.

Trump, seven months into his term in office, has become increasingly isolated over his comments following white supremacist violence in the Virginia college town of Charlottesville last Saturday.

“White House Chief of Staff John Kelly and Steve Bannon have mutually agreed today would be Steve’s last day,” White House spokeswoman Sarah Sanders said in a statement on Friday. “We are grateful for his service and wish him the best.”

“There is one less white supremacist in the White House, but that doesn’t change the man sitting behind the Resolute desk,” Democratic National Committee spokesman Michael Tyler said in a statement, referring to Trump’s Oval Office desk. “Donald Trump has spent decades fueling hate in communities, including his recent attempts to divide our country and give a voice to white supremacists.”

Bannon had been in a precarious position before but Trump opted to keep him, in part because his chief strategist played a major role in his 2016 election victory and was backed by many of the president’s most loyal rank-and-file supporters.

The decision to fire Bannon could undermine Trump’s support among far-right voters but might ease tensions within the White House and with party leaders. Republicans control the White House and both chambers of Congress but have been unable to pass major legislative goals including a healthcare legislation overhaul because of fierce intra-party divisions.

Trump fired Bannon from the White House post one year and one day after he hired the firebrand to head his presidential campaign.

Trump ran into trouble in recent days after saying anti-racist demonstrators in Charlottesville were as responsible for the violence as the neo-Nazis and white supremacists who instigated the protests.

Those remarks sparked rebukes from fellow Republicans, top corporate executives and some close allies even as some supporters, including Vice President Mike Pence, stood by Trump.

On July 28, Trump replaced his beleaguered White House chief of staff, Reince Priebus, installing retired General John Kelly in his place in a major shake-up of his top team. Trump then ousted White House communications chief Anthony Scaramucci on July 31 over an obscene tirade just 10 days after the president named him to the post. Scaramucci’s hiring had prompted Sean Spicer, a Priebus ally, to abruptly resign as press secretary.