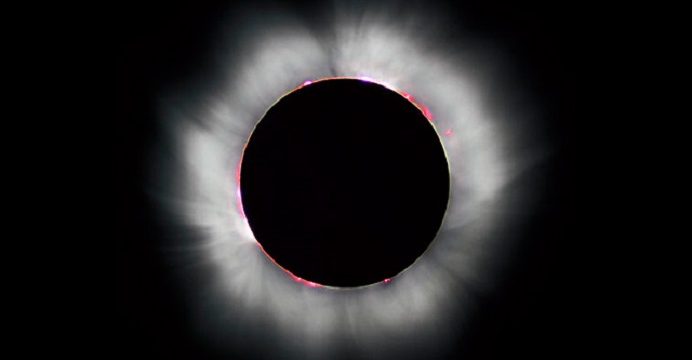 The first total solar eclipse to sweep North America in nearly a century will march across the continent August 21, casting a shadow over millions of people from coast to coast.

The event, coined the “Great American Eclipse,” is inspiring a surge in tourism in the United States, along with sky-high prices for travel to key viewing spots and a rise in scams such as counterfeit solar eclipse glasses, reports BSS.

Celebrations are planned nationwide, including weddings timed to coincide with the eclipse and a live Caribbean cruise ship performance of the 1983 hit “Total Eclipse of the Heart” by the singer herself, Bonnie Tyler.

In a nation that is increasingly divided along political lines, some expressed hope that fascination for this spectacular phenomenon would offer people a chance to unite.

“A large swath of the population will be able to easily see this eclipse,” astronomer James Webb at Florida International University told reporters.

“There are plenty of people out there in this day and age that are denying science, so this is an opportunity to show what we really know about the solar system.”

The total eclipse, when the Moon fully blocks light from the Sun, will be visible from a 70-mile-wide (113-kilometer) path that carves through 14 US states. A partial eclipse begins on the northwest coast of the United States shortly after 9 am (1600 GMT).

The total eclipse reaches the western coastline of Oregon at 10:16 am Pacific time (1716 GMT), then forges a diagonal path, exiting over South Carolina in the afternoon.

While the darkest shadows will fall over this “path of totality,” a partial eclipse extends far beyond it and may be visible as far north as Alberta, Canada and as far south as Brazil, weather permitting. Even Britain and western France may catch an evening glimpse of a tiny sliver of the eclipse at sunset.

The last time an eclipse crossed from the Pacific to the Atlantic Ocean was on June 8, 1918, when a total eclipse was visible from Washington to Florida.

Experts warn that looking directly at the eclipse can burn the retina, possibly causing lasting blind spots. Anyone planning to look skyward is urged to wear the proper protective eyewear. Regular sunglasses are not strong enough.

“Probably 100 million people are going to look at this but the dangers of looking at the Sun are real and serious,” said Vincent Jerome Giovinazzo, director of ophthalmology at Staten Island University Hospital Northwell Health.

“The damage can really be permanent and right smack in the center of their vision,” he told AFP.

The US Fire Administration has cautioned people to beware of counterfeit glasses that don’t provide the right level of protection. Solar glasses should be marked with the safety standard ISO-12312-2.

Those who don’t want to stare at the sky can use cardboard or paper to make a pinhole projector that allows an image of the eclipse to show through. Other projects aim to capture the sensory experience of an eclipse.

One, called Eclipse Soundscapes, is encouraging scientists and citizens to record environmental sounds before, during, and after to allow the blind and visually impaired to “hear and feel the physical qualities of the eclipse.”

For those unable to see the eclipse, NASA is planning an all-day live broadcast on its website, nasa.gov, which will feature on the Toshiba Vision screen in New York’s Times Square.

Rooftop viewing parties, kayak trips, baseball games and even weddings are being held nationwide to mark the celestial event.

According to the website greatamericaneclipse.com, between 1.85 and 7.4 million people are expected to travel into the path of totality, raising concerns about traffic jams and accidents.

Prices for lodging have soared, as most hotels and flights have been quickly booked to capacity. Raggedly motels along the highway in Casper, Wyoming — one of the choice viewing spots — were offering their last rooms at more than $2,100 per night as of Thursday.

The eclipse has also sparked a massive scientific effort to study the Sun’s outer region, known as the corona, which is easier to study when the Moon blocks much the Sun’s light.

In an age of smartphone technology, millions are expected to record and photograph the eclipse. Donald Liebenberg, 85, a scientist at Clemson University in South Carolina, has seen 26 eclipses in his lifetime and says each one is unique.

“When I first see the onset of totality, of course, I am impressed as the temperature drops and the sky darkens and birds return to their nests,” he told AFP.

“I am impressed that even the Babylonians were able to predict when and where an eclipse would occur.”