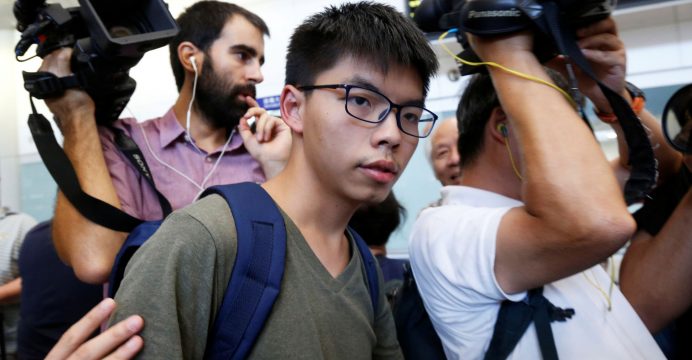 Hong Kong activist Joshua Wong has been jailed for six months for taking part in the 2014 pro-democracy protests.

He was tried and found guilty of unlawful assembly last year, and sentenced to community service.

But in an unusual move the Hong Kong government appealed the sentence, arguing it was too lenient.

The sentence means he cannot stand for local elections in the next five years. Two other student leaders, Nathan Law and Alex Chow, were also jailed.

Imprisoning us will not extinguish Hongkonger’s desire for universal suffrage. We are stronger, more determined, and we will win.

Law was sentenced to eight months in prison, while Chow received a seven-month sentence.

The BBC’s Juliana Liu in Hong Kong says rights groups have criticised the Hong Kong government, saying the appeals were political decisions intended to deter future protests and to keep young people out of elected politics.

But the Hong Kong government has denied this, saying there was “absolutely no basis” to claims of political motives.

Immediately after the sentence was announced, Wong took to his Twitter account with a series of defiant messages.

He ended his series of tweets with a brief “see you soon”.

The three activists were convicted for unlawful assembly in an incident which helped to trigger the mass protests in Hong Kong.

They were among a group of student protesters who scaled a fence surrounding Hong Kong’s legislative headquarters and occupied the building’s courtyard on 26 September 2014.

Their removal by police officers angered the public, and brought tens of thousands of people onto the city’s streets in the following days.