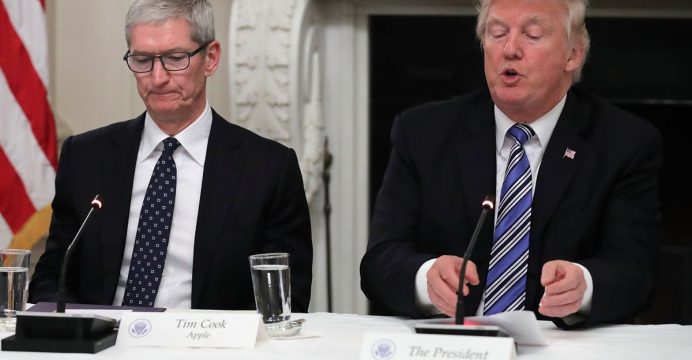 Apple chief executive Tim Cook has become the latest boss to criticise President Donald Trump over his response to the white nationalist rallies in Virginia.

Mr Cook said he did not agree there was a “moral equivalence” between white supremacists and “those who oppose them”.

In an email to staff obtained by BuzzFeed News Mr Cook said: “I disagree with the president and others who believe that there is a moral equivalence between white supremacists and Nazis, and those who oppose them by standing up for human rights.

“Equating the two runs counter to our ideals as Americans.”

He added that “in the wake of the tragic and repulsive events in Charlottesville, we are stepping up to help organisations who work to rid our country of hate”.

Apple will donate $1m to both the Southern Poverty Law Center and the Anti-Defamation League. It will also match two-for-one any staff donations to these and several other human rights groups until 30 September, Mr Cook said.

On Wednesday, Mr Trump said he was scrapping two business councils after more bosses quit over his handling of the violent clashes in Virginia.

Business leaders left the White House manufacturing council after the backlash against how he reacted to the far-right rally last weekend.

The clashes culminated in a woman’s death and nearly 20 wounded when a car ploughed into a crowd of anti-fascist protesters.

His announcement on Twitter came as the heads of 3M, Campbell Soup, Johnson & Johnson and United Technologies announced their resignations on Wednesday.

Mr Trump said: “Rather than putting pressure on the businesspeople of the Manufacturing Council & Strategy & Policy Forum, I am ending both.”

Before Mr Trump’s announcement, the Strategy and Policy Forum announced it was a joint decision to disband the council.

Businesses have been under pressure to distance themselves from Mr Trump over his handling of the clashes in Charlottesville, Virginia.