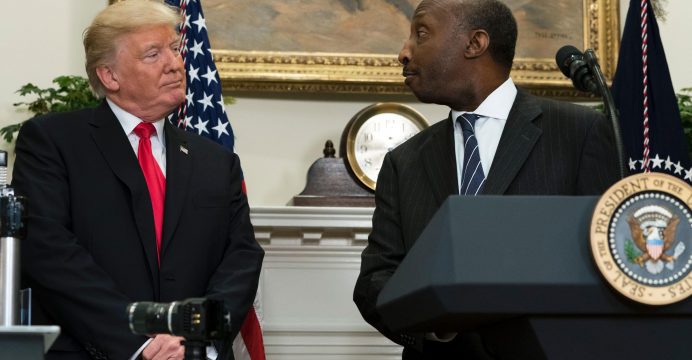 The chief executive of one of the world’s largest pharmaceutical companies resigned on Monday from a business panel led by Donald Trump, citing a need for leadership countering bigotry in a strong rebuke to the U.S. president over his response to a violent white-nationalist rally in Virginia.

The departure of Merck & Co Inc CEO Kenneth Frazier from the president’s American Manufacturing Council added to a storm of criticism of Trump over his handling of Saturday’s violence in Charlottesville, in which a woman was killed when a man drove his car into a group of counter-protesters, reports Reuters.

Democrats and Republicans have attacked the Republican president for waiting too long to address the violence, and for saying “many sides” were involved rather than explicitly condemning white-supremacist marchers widely seen as sparking the melee.

A 20-year-old man said to have harbored Nazi sympathies as a teenager was facing charges he plowed his car into protesters opposing the white nationalists, killing Heather Heyer and injuring 19 people. The accused, James Alex Fields, was denied bail at an initial court hearing on Monday.

Merck’s Frazier, who is black, did not name Trump or criticize him directly in a statement posted on the drug company’s Twitter account, but the rebuke was implicit.

Trump immediately hit back, but made no reference to Frazier’s comments on values, instead revisiting a longstanding gripe about expensive medicines. Now he had left the panel, Frazier would have more time to focus on lowering “ripoff” drug prices, Trump said in a Twitter post.

The outrage over Trump’s reaction to the Charlottesville violence added to a litany of problems for the president.

Opponents have attacked him for his explosive rhetoric toward North Korea and he is publicly fuming with fellow Republicans in Congress over their failure to notch up any major legislative wins during his first six months in office.

Trump was specifically taken to task for comments on Saturday in which he denounced what he called “this egregious display of hatred, bigotry and violence on many sides.”