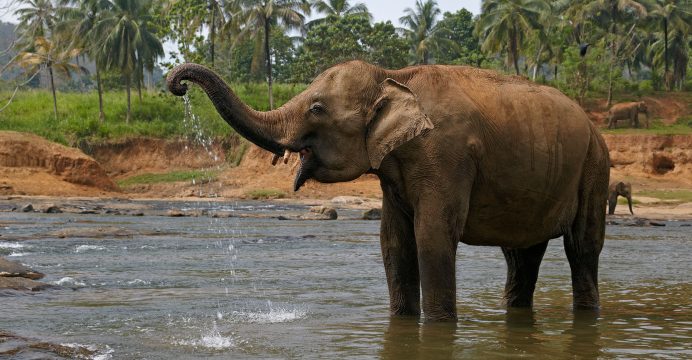 Elephants helped rescue hundreds of tourists from a flooded jungle safari park in Nepal, officials said on Monday, as the death toll from flash floods and landslides after four days of heavy rain rose to 70.

The Rapti River overflowed its banks in Sauraha, 80 km (50 miles) south of the capital, Kathmandu, inundating hotels and restaurants and leaving some 600 tourists stranded.

Sauraha, on the fringe of Chitwan National Park, is home to 605 rhinoceroses and is popular with foreign tourists, including Indian and Chinese visitors, mainly for rhino watching and elephant rides, reports Reuters.

“Some 300 guests were rescued on elephant backs and tractor trailers to (nearby) Bharatpur yesterday and the rest will be taken to safer places today,” Suman Ghimire, head of a group of Sauraha hotel owners, said by telephone on Monday.

Floods have also swept the nearby northeast Indian state of Assam state in the past two days, killing at least 15 people and displacing nearly 2.3 million, officials said on Monday.

In Nepal, relief workers said 26 of the country’s 75 districts were either submerged or had been hit by landslides after heavy rains lashed the Himalayan nation, home to Mount Everest and the birthplace of Lord Buddha.

The death toll was expected to rise with another 50 people reported missing, Information and Communications Minister Mohan Bahadur Basnet said.

Basnet said more than 60,000 homes were under water, mainly in the southern plains bordering India. Estimates of losses were not available, with rescuers yet to reach villages marooned by the worst floods in recent years.

“The situation is worrying as tens of thousands of people have been hit,” Basnet told Reuters.

Large swaths of farmland in the southern plains, Nepal’s breadbasket, are under water and the country could face food shortages due to crop losses, aid workers said.

“The heavy rains hit at one of the worst times, shortly after farmers planted their rice crop in the country’s most important agricultural region,” said Sumnima Shrestha, a spokeswoman for U.S.-based non-profit group Heifer International.

Monsoon rains, which start in June and continue through September, are important for farm-dependent Nepal, but they also cause heavy loss of life and property damage each year.