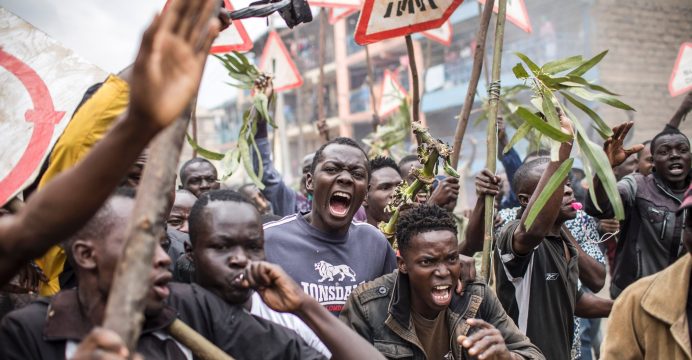 Kenyan opposition ‘will not be party’ to election result

Kenya’s opposition said on Friday it would “not be a party” to any imminent announcement of results of the presidential vote by the election commission and rejected the idea of taking its challenge to court.

Provisional results from polling stations show President Uhuru Kenyatta with a lead of 1.4 million votes ahead of Raila Odinga as he vies for a second and final five-year term. Odinga has lost the last two elections, claiming fraud in both cases.

Many Kenyans fear a repeat of the violence that followed the 2007 contested election, when about 1,200 people were killed and hundreds of thousands displaced as political protests lead to ethnic killings, reports Reuters.

Odinga’s camp said earlier on Friday it would accept the election result only if allowed to see raw data on the commission’s computer servers.

“We raised some very serious concerns, they have not responded to them. As NASA (opposition coalition) we shall not be party to the process they are about to make,” senior opposition official Musalia Mudavadi told reporters.

James Orengo, one of Odinga’s lieutenants and an election agent for the opposition coalition, said the process had been a “charade”.

He praised the Kenyan people’s history of standing up to stolen elections and said there were “constitutional alternatives” to challenging any result, but he stopped short of calling for protests.

“Going to court, for us, is not an alternative. We have been there before,” he said.

Earlier, Orengo had called for the candidates and observers to be given access to the election commission’s servers so there could be a transparent audit of data from 41,000 polling stations across the country.

Yakub Guliye, election commissioner in charge of information technology, said the opposition had not made a formal request and it would not act on a verbal request.

Normal procedure calls for the commission to release final results after cross checking its electronic tally with paper forms.