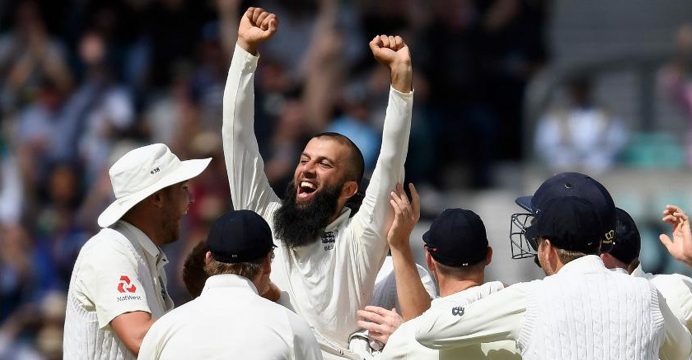 England all-rounder Moeen Ali’s scores of 14 and 75 not out have helped him move up three positions back to a career-best 21st position among batsmen in the latest MRF Tyres ICC Test Player Rankings while his seven wickets in the match have enabled him to retain a career-best ranking of 18th among bowlers and fourth in the table for all-rounders, in which he has crossed 400 points for the first time.

Moeen has finished the series against South Africa with career-best rankings as a batsman, bowler and all-rounder after another stellar show in the fourth and final Test which his side won by 177 runs on Monday to clinch the series 3-1.

WORLD RECORD: @MoeenAli becomes the first player EVER to score 250+ runs and take 25+ wickets in a 4 match series #bbccricket pic.twitter.com/rVo9mwTD5Y

His rise in the rankings was due to consistent performances as he became the first player to score 250 runs and take 25 wickets in a four-Test series and was named the player of the series along with South Africa’s Morne Morkel. Ali had started the series at number 27 among batsmen, 30th among bowlers and sixth in the table for all-rounders.

His team-mates Jonny Bairstow and James Anderson too have made significant progress. Bairstow’s knocks of 99 and 10 have helped him reach a career-best rank of seventh while Anderson’s seven wickets have helped him overtake India spinner Ravichandran Ashwin to take second place among bowlers.