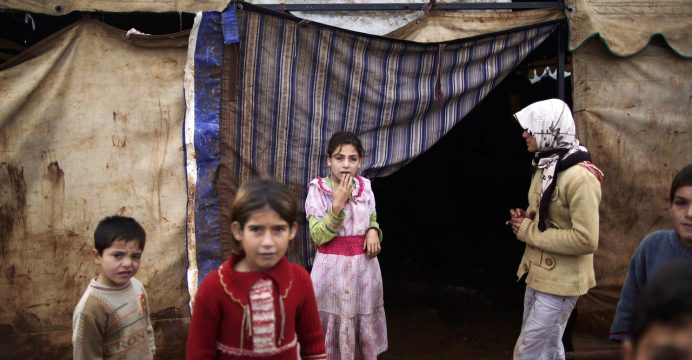 After fighting against Syrian President Bashar al-Assad for six years, rebel soldier Abu Mohammed laid down his arms as part of a peace deal in his home town of Moadamiya last year.

But he has now fled Syria into Turkey. His reason: the Syrian army told him to report for duty and he feared being sent to his death fighting his former allies or Islamic State.

“We’re tired of war and bloodshed, we’ve had as much as we can take,” Abu Mohammed said in a phone interview from Turkey.

The 27-year-old, who declined to give his full name, said he had signed onto the peace deal in Moadamiya, a Damascus suburb that was a rebel stronghold until last year.

He said he had been told the Moadamiya agreement would exempt him from frontline duty. “We stayed in the town on that basis.”

But this spring, he heard that men from Moadamiya had been conscripted not to serve locally but to fight for the government against rebel soldiers.

“People began to get worried,” he said, adding that he left after the army gave him 48 hours to report for military service.

Reuters could not independently verify the account of other soldiers from Moadamiya being taken to fight on front lines, but it echoed that of a second former rebel from Moadamiya.

Declining to be named, he said defectors were being sent to the front lines in breach of agreements communicated to them verbally by what is officially termed a “reconciliation committee”, consisting of officials and local representatives of a defeated area.

The government minister responsible for local agreements, Ali Haidar, denied the state had broken any commitments in Moadamiya, saying accusations it had were being promoted by foreign states and rebels “annoyed” by the agreements.

He said many former rebels had joined the army, and hundreds had been “martyred in the front lines against terrorism”.

The rapid succession of agreements in former rebel strongholds near Damascus such as Daraya, Qudsaya and al-Tal underline how far the scales have tipped in Assad’s favor in the war that spiraled out of protests against his rule in 2011.

It is part of a dramatic reversal of fortunes for Assad since 2015, aided militarily by Russia and Iran.

Fear of conscription has been a major sticking point in the local agreements, a diplomatic source said, helping to encourage residents to leave for rebel-held areas of northern Syria in what Assad’s opponents call a policy of forced displacement.

The government has given safe passage to thousands of rebels and civilians out of government-held territory under the deals.

Syrian officials say people are free to choose whether to go or stay put and that the deals are designed to secure peace and restore state services and authority to recaptured areas.