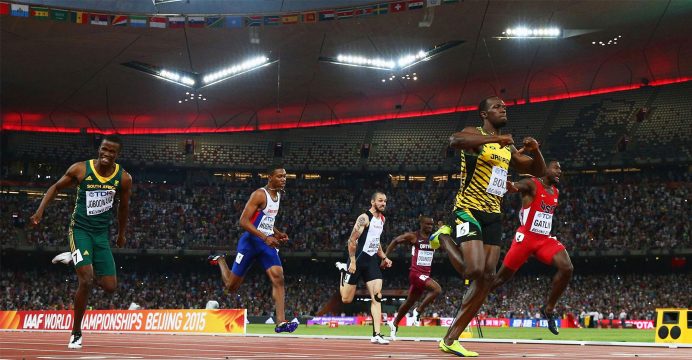 Usain Bolt will run in the 4×100 meters relay heats for Jamaica on Saturday despite being a bit sore after winning bronze in the 100m final at the weekend, he told Reuters on Monday.

Bolt usually runs in the 200 meters individual event but opted not to compete at that distance in London, which is his last major championships before he retires, and the 30-year-old therefore has the scope to compete in the relay heats this time.

“We’ll see, we haven’t done any baton changes as yet with the guys, but I feel we are ready,” the 11-time World Championships gold medalist said of their chances.

“I have talked to Julian Forte (100m semi-finalist) a little bit. I haven’t really talked to the youngsters so we’ll see when it comes to the baton changes, but I’m always excited to run relays and we see what the guys are prepared and ready to do.”

Yohan Blake is the only other experienced member of Jamaica’s sprint relay pool to have won medals at the World Championships or Olympics.

“Physically I am alright, there is a little bit of pain, but nothing a massage can’t cure, I’m taking it easy,” Bolt said of his condition two days after finishing third despite clocking his season’s best-equaling 9.95 seconds in the 100m final.

“A little bit disappointed but such is life,” the eight-time Olympic gold medalist added of his bronze medal.

“I’ve done my best as always; went out there and gave my all and I’m just happy to be here and looking forward to the 4×100,” added, the 100m and 200m world record holder who has helped Jamaica win the last four world 4×100 titles.