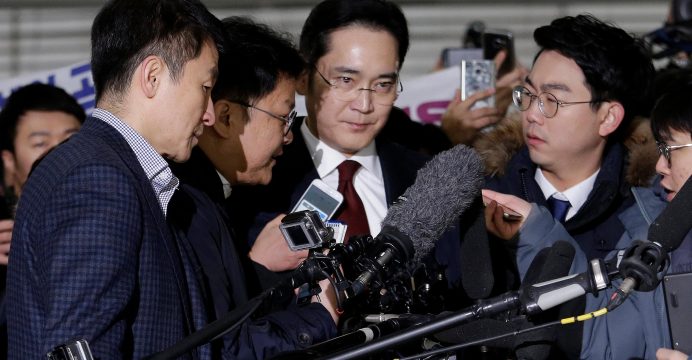 Lee, the de facto leader of one of Asia’s largest conglomerates, has been in detention since February, on trial for charges ranging from embezzlement to perjury, in a scandal that led to the ouster of former president Park Geun-hye, reports Reuters.

“Even though Lee is the ultimate receiver of the gains (from this bribery case), he has been pushing the responsibility to others accused,” one of the team of special prosecutors told the court.

The court ruling is expected before Aug. 27, when Lee’s current period of detention ends. Other charges he faces include wrongfully transferring assets overseas and hiding the proceeds of a crime.

The defense reiterated his denial of wrongdoing, questioning whether the prosecution was relying on public sentiment to secure a prison term for Lee, 49, whose father, the group patriarch Lee Kun-hee, was hospitalized in 2014.

The prosecution has said Samsung’s intent behind supporting funds backed by Park, and sponsoring the equestrian career of the daughter of her confidante, was to get government support for efforts to cement Lee’s control of the smartphones-to-biopharmaceuticals business empire.

However, Lee’s lawyers argued that his so-called overarching intention of cementing ownership control was “a fictional construct” made up by prosecutors, with moves such as the merger of two Samsung affiliates in 2015 aimed at ensuring survival and growth of individual companies.