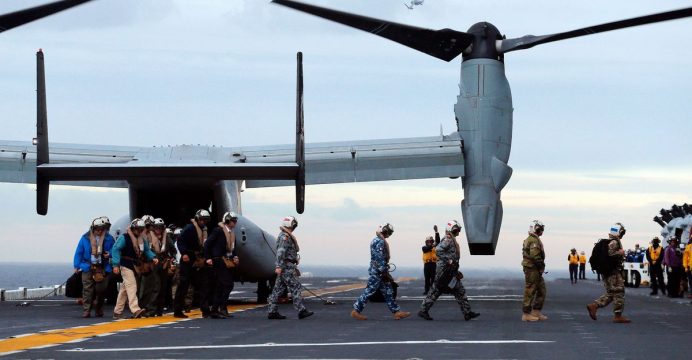 The Australian government said on Sunday it would deploy its armed forces to assist in recovery efforts after the U.S. Marine Corps suspended a search for three Marines missing since their aircraft crashed off Australia’s northeast coast a day earlier.

The Marine Corps said earlier they had shifted from a search-and-rescue effort to a recovery operation, which could last several months, and had notified the next-of-kin of the three missing Marines.

“As the sea state permits, recovery efforts will be conducted to further search, assess and survey the area …,” they said in a statement.

The U.S. Marines have described the incident involving the MV-22 Osprey tilt-rotor aircraft as a “mishap” and said it was under investigation.

Ospreys have been involved in incidents resulting in deaths or injuries in recent years.

Australian Defence Minister Marise Payne said the Australian government would assist the U.S.-led recovery effort after what she described as an “extensive search-and-rescue operation” was called off.

“Our thoughts are with all those affected by this tragic event and the Australian Government stands ready to support the U.S. further in any way we can,” she said in a statement.

Payne said a Royal Australian Navy survey ship was en route to the search area. A navy diving team would be sent soon and army aviation assets were “at short notice readiness to support any further requirements”, she said.

Apart from the three missing Marines, 23 other personnel aboard the aircraft had been rescued. Australian emergency officials said one person had been taken to hospital in Rockhampton in northeastern Queensland state but gave no other details.

“All other personnel are accounted for and safe,” the III Marine Expeditionary Force said on Twitter.