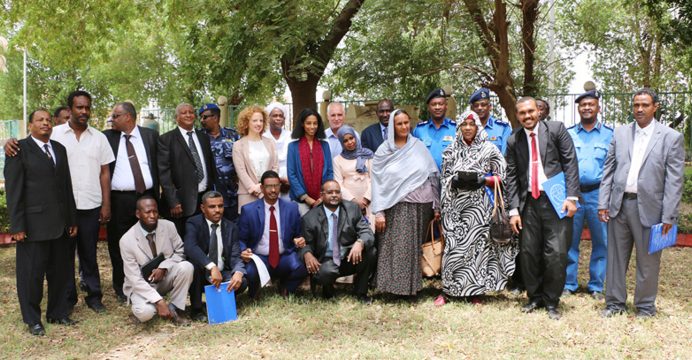 Over the past two weeks a 10-day training for 20 senior-level judges, lawyers and police officers, on investigating and prosecuting human trafficking cases, took place at the Sudan Judicial and Legal Science Institute.

The workshop, a joint venture between IOM, the UN Migration Agency, and the Institute was held as part of the United Kingdom’s Foreign and Commonwealth’s Office (UKFCO) funded project: Strengthening the Capacity of the Criminal Justice System in Sudan to Address Human Trafficking. It follows on from the Curriculum Development Workshop held in May 2017.

The training curriculum was developed by 20 participants representing the Sudan Judiciary, the Criminal Prosecution Officer, the Office of the Attorney General, Law Enforcement Branches, and the Ministry of Justice, as well as social workers. Over the next few months, the new curriculum will be used to train judges, lawyers and police officers throughout Sudan on effective investigation and prosecution of human trafficking.

“There were also a lot of practical exercises in the workshop, which has solidified the complex information being discussed,” said Amal Taha Husein, an independent lawyer and participant.

At the closing ceremony held to formally launch and endorse the new training curriculum, Waleed Husein Eltayeb, from the Police Training Authority expressed his appreciation to the workshop stating that it had a “multitude of benefits such as the collaboration of such a diverse group of government counterparts.”

“Seeing such Government involvement through the level of participation in this workshop is evidence of the Government of Sudan’s commitment to the 2014 Combatting Human Trafficking Act and its seriousness in making the Act a reality with emphasis on the importance of human rights in Sudan,” said Howayda Awad Elkarim from the Ministry of Justice.

The workshop was designed and facilitated by Phil Marshall, IOM Sudan’s international expert on anti-trafficking, Rifaat Makkawi, national legal expert and defense lawyer, and Omer Saad, national psychosocial expert. The curriculum for the training program will be complemented by the continued development of training materials targeting legal practitioners.