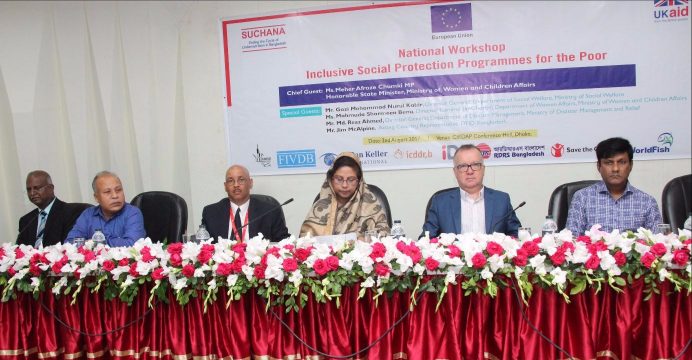 Save the Children, with six other consortium members, is implementing Suchana aiming to significantly reduce the incidence of stunting in the districts of Sylhet and Moulvibazar in Bangladesh, where the highest rates of stunting is at 49.6%.

Social Protection Access Study was conducted in late 2016 in an effort to better understand the barriers of poor and marginalized people’s access to safety net programs. A national level workshop was organized on August 2, 2017 to share the study findings with different stakeholders including ministries of Bangladesh government, NGOs, UN agencies, donors and academicians to receive their feedback and recommendations. Ms. Meher Afroze Chumki MP, Honorable State Minister, Ministry of Women and Children Affairs of Bangladesh inaugurated the workshop as Chief Guest.

The study was conducted among 818 beneficiaries of the program. The questions focused on four social protection schemes in particular, which were identified to be operating in Sylhet Division and which were among the most relevant for Suchana beneficiaries based on formal eligibility criteria. The programmes were: (i) Employment Generation Programme for the Poor; Vulnerable Group Development, (iii) Maternity Allowance Programme for Poor Lactating Mothers; and (iv) Allowance for Widowed, Deserted and Destitute Women.

Nearly one in four (23%) of the beneficiary respondents who were in receipt of benefits from one of the schemes explained they experienced difficulties in acquiring the card they are given in order to access the schemes, 60% said they did not know where to lodge complaints.

Representatives from Government, non-government agencies, donor and professionals attended the programme and provided their feedback on the study. Save the Children will compile recommendations provided by stakeholders to incorporate in the Social Protection Strategy for the Suchana program.