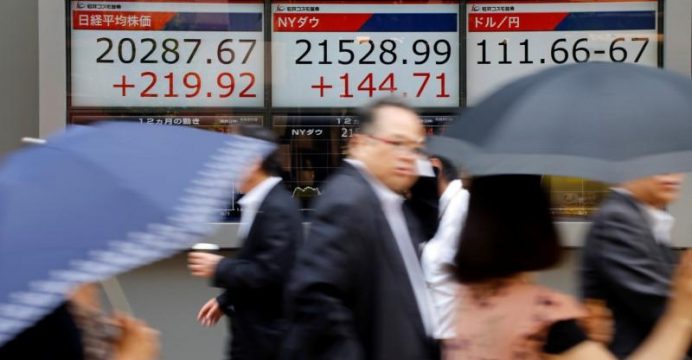 “We haven’t seen a major correction in tech shares so far this year so they may be hitting a speed bump,” said Nobuhiko Kuramochi, chief strategist at Mizuho Securities. 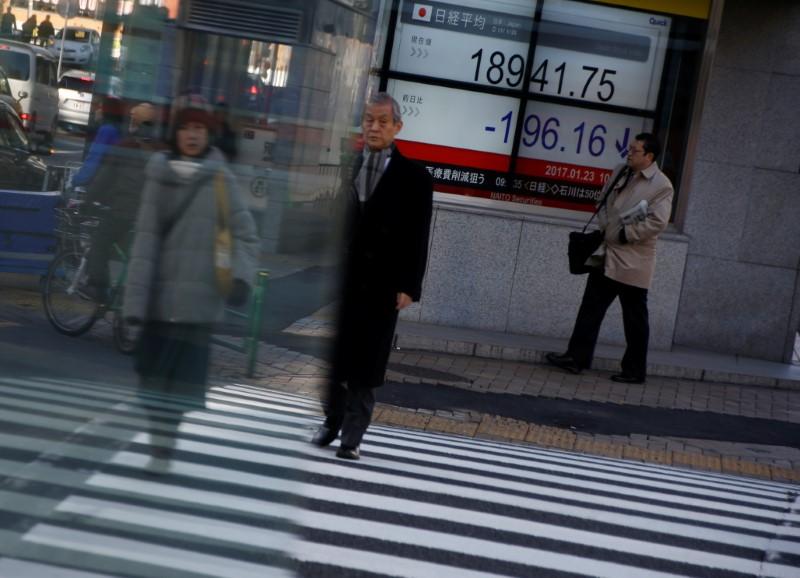 People walk past an electronic board showing stock prices outside a brokerage in a business district in Tokyo, Japan

“Those shares that were bought heavily on Tuesday are being sold aggressively. I would suspect investors want to take profits quickly after they saw a sharp correction last week,” said Yukino Yamada, senior strategist at Daiwa Securities.

In New York overnight, the Dow Jones Industrial Average topped the 22,000 mark for the first time on the strength in Apple shares following its earnings.

The S&P 500 gained 0.05 percent, hovering just below its record high touched last week, supported by upbeat earnings and rising expectations that the Federal Reserve’s policy tightening will move ahead only slowly.

“The stock markets are supported by steady growth in earnings,” said Mutsumi Kagawa, chief global strategist at Rakuten Securities, noting the steady growth in forwarding earnings in the United States, Japan and elsewhere.

“In addition, even as the economy grows, both policy interest rates and long-term interest rates remain low because inflation remains tame due to various structural reasons,” he added.

U.S. inflation has been contained even as the country’s labor market appears to be in its best shape in many years, with the jobless rate staying near a 17-year low.

A report by private payrolls processor ADP showed on Wednesday that private U.S. employers added 178,000 jobs in July, slightly below economists’ expectations, although payroll gains in June were revised up to 191,000 from an originally reported 158,000.

In the currency market, the dollar has been losing its luster as the euro zone and a few other countries have been slowly winding back stimulus.

The European Central Bank, which is buying 60 billion euro ($71 billion) bonds per month to shore up euro zone economies, is expected to unveil a plan to wind down the asset purchase program in coming months.

The common currency has strengthened sharply against the safe-haven Swiss franc, having gained more than four percent in less than two weeks to 1.1488 francs.

The British pound held near its highest in almost 11 months against a broadly weaker dollar ahead of the Bank of England’s “Super Thursday”, which could shed light on how soon interest rates could be lifted.

Sterling has been supported in recent weeks by expectations the bank might finally be getting ready for a hike after a series of hawkish comments from policymakers, though Governor Mark Carney could be more cautious.

Oil prices dipped as a rally that pushed up prices by almost 10 percent since early last week lost its momentum, despite renewed signs of a gradually tightening U.S. market.