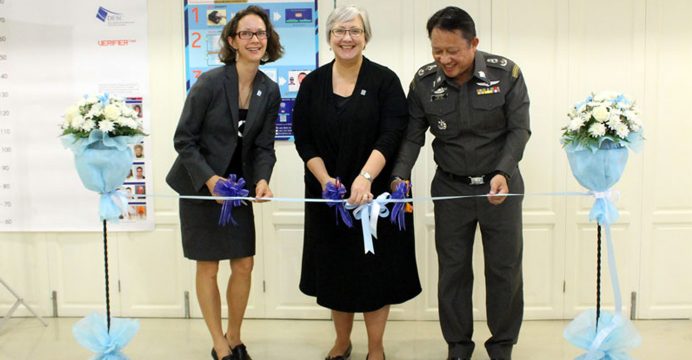 The donation is part of the efforts by IOM, the UN Migration Agency, and TIB to curb irregular migration and combat transnational organized crime as part of a project: Strengthening Border Management and Intelligence Capacity of Thai Government Officials, funded by the Government of Canada.

Developed by IOM, the Verifier TD&B is an automated, standalone system designed to help border control officers to conduct secondary inspections quickly and efficiently. A suspect traveler’s passport can be verified within 10 seconds.

Ambassador of Canada to Thailand Donica Pottie highlighted Canada’s commitment to tackling irregular migration globally. “Fraudulent identity and travel documents represent a threat to the integrity of our border control systems and potentially to our national interests and security. To respond to this challenge, Canada has been working closely with IOM and the Government of Thailand on a wide range of security initiatives, including those related to anti-migrant smuggling and counter-terrorism,” she said.

IOM Thailand Chief of Mission Dana Graber Ladek added: “States need to address the challenge of ensuring the right balance between open, but at the same time secured and controlled borders. The monitoring and identification of passport fraud plays a crucial role in the suppression of transnational crime.”

Effective border management remains a priority issue for Thailand, which welcomed a record 32.59 million visitors in 2016. Several passport forgery rings linked to the global trade in illicit drug trafficking, trafficking in persons and migrant smuggling have been smashed by the Thai authorities in recent years.