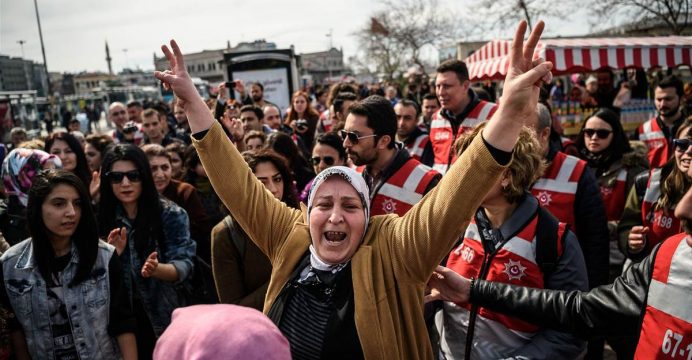 Hundreds of Turkish women marched in the country’s biggest city Istanbul on Saturday to protest against the violence and animosity they face from men demanding they dress more conservatively.

The march, dubbed “Don’t Mess With My Outfit”, started in the Kadikoy district on the Asian side of the city. Women chanted slogans and carried denim shorts on hangers as examples of the type of clothing some men say they find unacceptable, reports Reuters.

“We will not obey, be silenced, be afraid. We will win through resistance,” the crowds chanted, holding up posters and LGBT rainbow flags.

Istanbul has long been seen as a relatively liberal city for women and gay people.

But critics say President Tayyip Erdogan and his Islamist-rooted AK Party have shown little interest in expanding rights for minorities, gays and women, and are intolerant of dissent.

Protesters say there has been an increasing number of verbal and physical attacks against women for their choice of clothing.

In one incident in June, a young woman, Asena Melisa Saglam, was attacked by a man on a bus in Istanbul for wearing shorts during the Muslim holy month of Ramadan. Video of the incident showed the man hitting her while the bus driver watched.