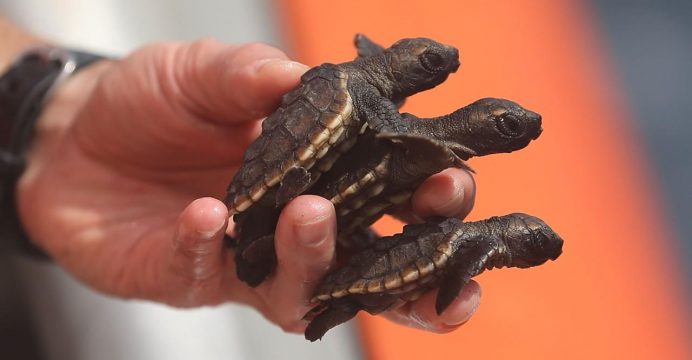 On Lebanon’s beaches, endangered sea turtles have a human ally to help them in the face of myriad threats.

Mona Khalil, 77, founded The Orange House Project in 2000 to protect sea turtles on the south Lebanon beach in el Mansouri from predators, pollution and encroaching humans.

With sea turtles returning to the same beach where they were born to lay their eggs, Khalil relocates nests threatened by agriculture and installs metal grids to protect them from predators, reports Reuters.

She also raises the eggs by hand at the group’s facility and released the first of this year’s baby turtles earlier this month. Every time there are new hatchings and turtles released she invites groups of families and school children to watch.

“I didn’t know we had sea turtles who came to this beach here to lay their eggs here,” teacher Faten Chalhoub, 34, who was there with her nieces told Reuters.

“When I saw them for the first time it brought me great happiness, I loved them. I fell in love”, she added.

There are some in the town who feel differently about Khalil’s work. Her activism was responsible for banning dynamite fishing in the area, which resulted in her house being shot at and attempts to burn her farm down.

The exact number of turtles in the eastern Mediterranean is uncertain. An estimate cited by the World Wildlife Fund suggested that there were 60,000 nesting female loggerhead turtles worldwide.