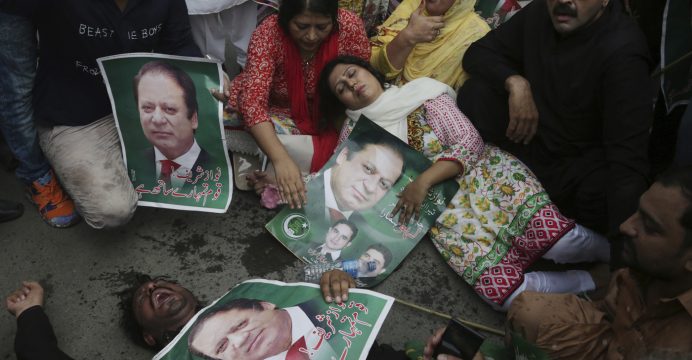 Pakistan’s ousted prime minister Nawaz Sharif on Saturday nominated his brother Shahbaz to eventually take over as leader of the country and lashed out at political rivals and the Supreme Court ruling that disqualified him from office.

Sharif also put forward a staunch ally from his ruling party, Shahid Khaqan Abbasi, as an interim prime minister while his brother contests a by-election for parliament to become eligible to take the reins.

For now, the nuclear-armed South Asian country is without a leader until parliament convenes to elect a new premier, reports Reuters.

Dynastic politics have a long history in Pakistan, where in the past the military has staged multiple coups and no prime minister has completed a full term since independence from British colonial rule in 1947.

Sharif, whose party won a majority in parliament in 2013, said he was dumbfounded by Friday’s Supreme Court ruling to disqualify him from office over unreported income from a company owned by his son in Dubai.

The court also ordered a criminal investigation into him and his family.

Sharif has said the salary paid to him was nominal and he never received the funds. He described the court case as a political vendetta by opposition leader Imran Khan and its verdict as judicial overreach.

“My conscience is clear,” he said in his first public comments since resigning on Friday after the court ruling declared him unfit for office.

He also stressed that the court did not prove any corruption or siphoning off public money after months of investigation stemming from the revelation in last year’s “Panama Papers” leaks that his children were linked to offshore companies.

Still, Sharif said he would no longer seek public office and urged supporters to back his brother – now chief minister of Punjab province – as long-term successor.

“I have quit my office, so someone has to take it, and after a lot of consultations … Shahbaz Sharif is nominated,” Sharif said in a speech to members of his ruling Pakistan Muslim League-Nawaz (PML-N) party.

Sharif nominated ally Shahid Khaqan Abbasi, who was the petroleum minister in his last cabinet, as an interim prime minister for a period of less than two months.