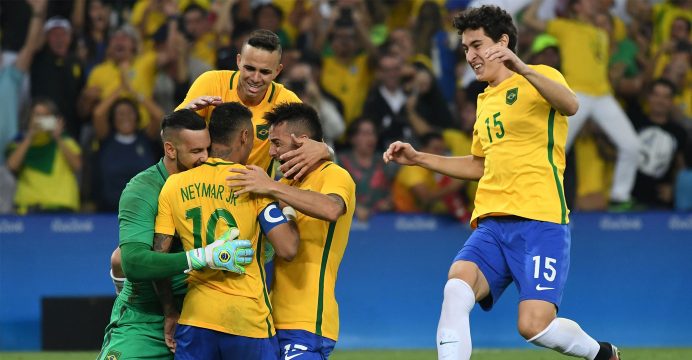 Neymar, the darling of starless Brazil

Brazilian golden boy Neymar is riding high on a wave of unprecedented popularity at home where a year ahead of the World Cup news of his possible transfer has become an issue of national debate.

Reportedly pondering a 222-million euro ($256.8 million) move to Paris Saint-Germain from Barcelona, the Brazil captain showed this week why the French club would be willing to pay a world-record price to get him.

Neymar remained serene amid the speculation frenzy, scoring for Barcelona in a 1-0 victory over Manchester United in an International Champions Cup friendly midweek.

But the general view among football pundits at home is that he must leave Barcelona to emerge from the shadow of Argentinian teammate Lionel Messi and target individual glory.

Brazil fans see Neymar as the key to a sixth World Cup title in Russia next year and the first Brazilian to win the Ballon d’Or since Kaka in 2007.

In a recent poll carried out by Globoesporte.com 75 percent of fans favoured his transfer away from Barcelona.

All rumours are meticulously dissected in the Brazilian media, with television station Esporte Interativo creating a global buzz in mid-July by announcing that Neymar had “accepted PSG’s offer”.

In Brazil, Neymar is an icon, and the transfer has become a national issue.

If Messi has long been criticised in Argentina for his lack of national commitment, Neymar has always delivered.

At just 25 years he is already the fourth top scorer in Brazilian history with 52 goals from 77 matches — three goals shy of Romario and already past legends such as Bebeto or Jairzinho.

The player from Sao Paulo has always had huge pressure on his shoulders as the unique Brazilian star of his generation.

Since his early days at Santos — also the team of the legendary Pele — Neymar has been touted as the next superstar.

In 2013 he even inherited the number 10 jersey immortalised by three-time world winner Pele, despite always playing 11 for his club side.

Under the guidance of Tite, Brazil were the first country to book a ticket to the 2018 World Cup, with Neymar scoring five times and contributing six decisive passes in six games.