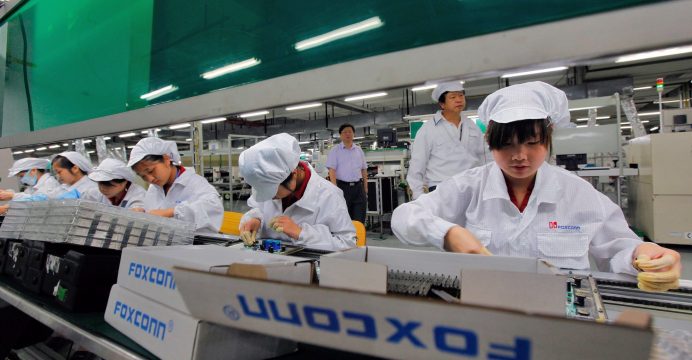 Why the iPhone Can’t Be Made in the US?

Apple is not the top seller of smartphones in the world — not even close. It does, however, have the vast majority of smartphone profits in the world with an estimated 90%. The margins on Apple’s hardware are so large that it can out earn OEMs that sell several times as many phones. There’s been a lot of talk about encouraging the manufacturing of electronics in the US with the incoming Trump administration, but is it even feasible to build an iPhone in the US? If Apple built them in the US, would that really create many jobs?

It is estimated that the iPhone 7 costs about $400 for Apple to produce. It sells for $649 in the US. A large chunk of the cost of making the phone has to do with getting components to the factories in China’s Zheng.

The NY Times has an excellent report on why Apple ignores America when it comes to making the iPhone and how that’s better for Apple.

During that infamous Silicon Valley dinner with Barack Obama, the POTUS asked Steve Jobs, “what would it take to make iPhones in the United States?” And once upon a time, Apple would have loved to make the iPhone in the US of A. In fact, the old Apple prided itself on making products in the USA. But ever since the early 2000’s, Apple has made most of its products outside the US. Why? It’s a combination of not only cheaper labor but better labor, better factories and scale. According to the NY Times, who spoke with Apple executives:

Apple’s executives had estimated that about 8,700 industrial engineers were needed to oversee and guide the 200,000 assembly-line workers eventually involved in manufacturing iPhones. The company’s analysts had forecast it would take as long as nine months to find that many qualified engineers in the United States.

That flexibility, speed and scale in factory workers just doesn’t exist in the US. Apple says it “shouldn’t be criticized for using Chinese workers” because “the U.S. has stopped producing people with the skills we need.” There just aren’t enough skilled workers in the US that have that inbetween degree of high school and college. That’s what Apple wants in its factory workers and that’s what China gives ’em.

And though everyone cites how the cost of labor is much cheaper in China, the fact is labor is less important to a company’s bottom line than supply chains are. And the reality is, all the supply chains to manufacture consumer electronics exist in China. Components are made in this facility, glass next door, a million screws can be found down the road, so on and so on—that convenience saves companies a lot more money than the benefit of hiring cheap labor.