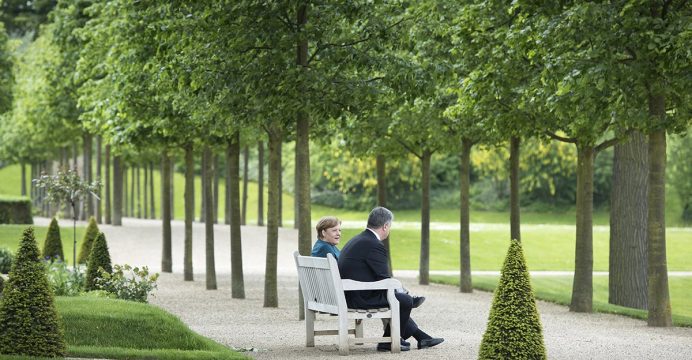 Macron to discuss Ukraine with Putin, Merkel and Poroshenko

French President Emmanuel Macron will call the leaders of Russia, Germany and Ukraine on Monday to discuss the conflict in eastern Ukraine, his office said in a statement, as world powers step up efforts to try to end the violence in the region.

The conversations with Russian leader Vladimir Putin, Germany’s Angela Merkel and Ukraine president Petro Poroshenko are part of moves involving the four countries since 2014 to resolve the separatist conflict in which some 10,000 people have been killed, reports Reuters.

A ceasefire agreement was signed in February 2015 in Minsk, the capital of Belarus, but has failed to end the violence.

At the time, Macron had said he saw no better way of negotiating an end to the conflict in Ukraine than through the Minsk agreements – comments that contrasted with those of U.S. Secretary of State Rex Tillerson.

Tillerson said on June 14 that the administration of U.S. President Donald Trump did not wish to be “handcuffed” by the 2015 accords, and he suggested Kiev could reach a separate, independent agreement with Moscow.

Tillerson carried out his first official visit to Kiev earlier this month, during which he said Russia should make the first move to bring peace to eastern Ukraine, and that Washington’s primary goal was the restoration of Ukrainian territorial sovereignty.