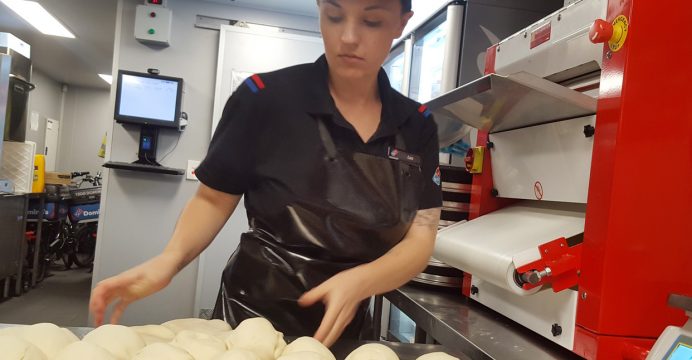 Global pizza brands Domino’s and Papa John’s are preparing an assault on Russia’s provinces, betting they can turn a profit far from Moscow as online card payments become more widespread and consumers get to know foreign brands better.

While stay-at-home Muscovites can order an array of international pizza brands from Sbarro to Domino’s to Papa John’s, regional cities such as Rostov-on-Don and Nizhny Novgorod are still chiefly the preserve of small local chains.

Western fast food chains have also had to adapt menus to suit Russian palates better, once the allure of new foreign tastes has worn off. One of Domino’s best-selling pizzas is the “Russian” with 13 toppings including potato, beef, pork, bacon, mushrooms, pepperoni and cheese to help ward off the cold.

But Domino’s Pizza’s DZP.N Russian franchisee, DP Eurasia, believes the time is now right to expand beyond Moscow, where sales at the 76 outlets it had at the end of March are far outstripping growth in its main market Turkey.

“The company has done its own research and realized that there’s almost no quality pizza in the regions, which gives us enormous ground for development,” said DP Eurasia’s head of Russian development Elena Ivanova.

Like-for-like sales in Russia have risen 30.1 percent this year up to May 21, whereas the comparable figure for Turkey was 6.3 percent growth.

Domino’s was Russia’s third-largest pizza chain last year yet its share of the fragmented market stood at less than 2 percent, according to Euromonitor International.

For now, the company is using part of the 148 million pounds ($192 million) it raised listing shares in London in June to add 40 outlets this year, venturing as far as Krasnodar, 1,200 kilometers (750 miles) south of Moscow.

Domino’s closest rival is not standing idle. The Russian franchise of U.S. chain Papa John’s International Inc, the fourth biggest player in the country in 2016, sees room for 60-80 store openings each year over the next five years.