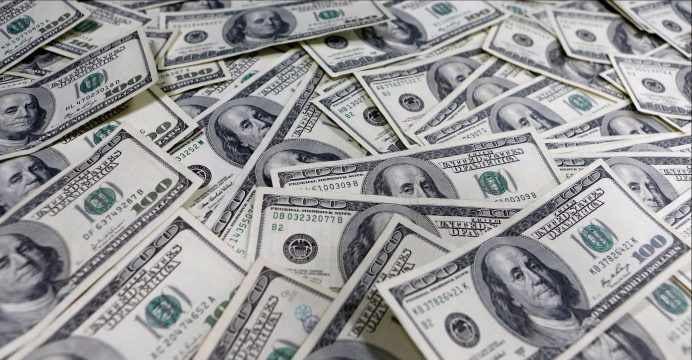 The dollar’s travails extended into Wednesday

The dollar’s travails extended into Wednesday as Donald Trump faces a battle to push through his much-vaunted economic agenda, while Hong Kong was the standout Asian equity market, rising for an eighth straight day.

After a blistering rally in the months after the tycoon’s November election win — fuelled by bets his tax cuts and big spending would fan inflation — the greenback has been hobbled by a congressional logjam and a series of crises engulfing the White House, reports BSS.

A crucial blow was struck Monday when it was clear his Republican party would not be able to muster enough senators to pass controversial health care reforms, throwing into doubt his ability to pass his big-ticket measures.

With inflation stuck below the Federal Reserve’s two percent target, dimming chances of any economic reforms have traders questioning whether it would lift interest rates for the third time this year. Just months ago there had been bets on four hikes.

“The market has been waiting for the Trump failure cascade to begin and yesterday’s health care headlines once again bring into question the administration’s ability to enact on their key legislative promises leaving investors in limbo and the dollar sagging,” Stephen Innes, a senior trader at OANDA, said in a commentary.

The greenback was marginally up against its major peers but remained stuck at multi-month lows, with the euro enjoying support from expectations the European Central Bank will begin to wind in its stimulus in the near future.

The bank is to hold its next policy meeting Thursday and boss Mario Draghi’s statement will be pored over for clues about its timetable as the euro zone economy continues to improve.

Other, higher-yielding currencies are also faring well with the Australian dollar pushing towards 80 US cents for the first time since early 2015, while the Mexican peso is also at more than one-year highs.

The peso had been hammered to record lows immediately after Trump’s election on fears about his warnings to tear up trade deals and repatriate thousands of Mexicans.

In share trading, Hong Kong climbed 0.3 percent to a fresh-two year high as mainland Chinese traders head south on worries about a government crackdown on risk-taking in financial markets.

While Shanghai rose 0.4 percent Wednesday it has suffered volatile trading in recent weeks as leaders try to address a debt crisis in the country.

“If China’s market is under the tighter regulation that means there’s relatively limited opportunity at least in the near term, so they would prefer to go to another market,” said Ben Kwong, executive director at KGI Asia in Hong Kong.

“Even though Hong Kong stocks have gained 21 percent this year, we’re not seeing much correction pressure,” he told Bloomberg News.

Most other regional markets were higher, with Tokyo up 0.1 percent by the break, Sydney rising 0.7 percent, Singapore and Wellington each 0.1 percent higher and Taipei gaining 0.4 percent.