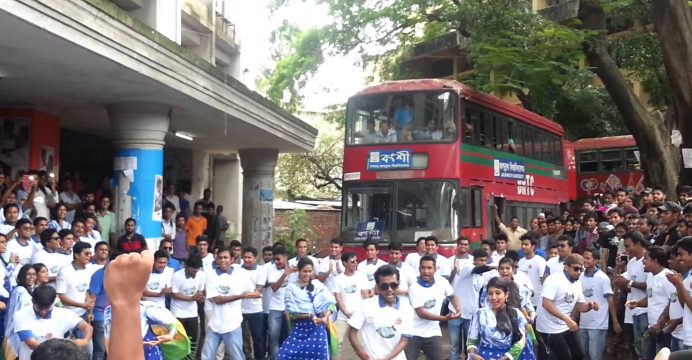 A group of students of Jagannath University (JnU) of Bangladesh on Monday afternoon beat a police sergeant for intercepting varsity buses being driven on the wrong side of the road near Banglamotor intersection in the capital.

The victim sergeant is Kaiser Hamid.

A witness named Reaz Rahman told Prothom Alo that three Karwan Bazaar-bound double-decker buses of Jagannath University were stuck in the traffic at Banglamotor crossing around 5:15pm. Then, some students jumped off the buses and tried to direct two of the buses towards Sonargaon crossing through the wrong side of the road, stopping Shahbagh-bound running vehicles.

He said students involved in an altercation with sergeant Kaiser when he requested them not to direct the buses on the wrong side. At one stage, some more students got off the buses and started beating the sergeant.

He further said the students left the scene only after another police sergeant started filming the fracas with his cell phone.

Another witness said at the very beginning of the incident one of the buses ploughed through the traffic moving in opposite direction, creating a chaos at the crossing.

He said the police sergeant came under the wrath of the varsity students when he tried to bar two other buses from being driven on the wrong side.

“But a group of students of the university locked into a brawl with the police officer. The buses, however, were sent to the right directions later,” he added.