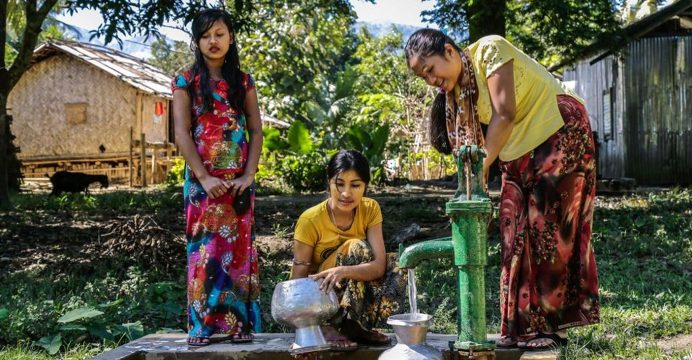 Infrastructure can be a powerful driver of gender equality in Bangladesh

Infrastructure projects have significant potential to increase the economic empowerment of women in Bangladesh and contribute to the government’s efforts to promote gender equality, says an evaluation of the Asian Development Bank’s (ADB) support for gender and development in the country by ADB’s Independent Evaluation Department.

The evaluation makes clear, however, that building new roads, expanding electricity grids and improving water supply services — the mainstay of ADB’s support for Bangladesh over the past decade — do not automatically lead to better livelihood opportunities for women or other gender-equitable results.

“Women must be given a seat at the table in infrastructure-building,” says Marvin-Taylor Dormond, Director General of Independent Evaluation at ADB. “Women need to be part of the decision-making in all phases of infrastructure projects, and giving them a voice in such crucial driver of economic growth will go a long way toward reducing Bangladesh’s still high levels of gender inequality.”

The evaluation assessed ADB’s support for gender and development in its Bangladesh operations during 2005-2015. The period saw a marked increase in infrastructure projects in ADB’s $9 billion portfolio for the country, of which infrastructure accounted for $5 billion.

Both the Government of Bangladesh, in its Seventh Five Year Plan 2016-2012, and ADB are committed to promoting gender equality. The evaluation found that this collaboration and ADB’s “top-down and bottom-up” approach to strengthening gender equality by working with government ministries, local governments, and communities was effective.

ADB-supported infrastructure projects in Bangladesh were particularly effective in promoting gender equality when they enhanced women’s access to education and health care, and helped promote their economic empowerment. For example, the $206 million Second Rural Infrastructure Improvement Project, to improve roads in the Chittagong, Dhaka, and Rajshahi divisions increased livelihood opportunities by building sections for women in markets, and training women in shop management and other income-generating skills. The road improvements also contributed to increasing the enrollment of girls in schools, and made it safer and easier for women to go to work.

The evaluation found that significant strides have been made in reducing gender disparities in education and health in Bangladesh, where the status of women has generally improved over the last decade.

But women continue to face high levels of inequality in livelihood opportunities and access to economic assets. In rural Bangladesh, women own only 8% of productive assets, according to the latest available estimate. Women’s participation in the workforce, though improving thanks to the garment industry, labor migration and microfinance programs, remains low, at an estimated 34%. The evaluation raises the concern that these factors will heighten the risk of women to the effects of vulnerability to shocks.

“Because of high levels of inequality in livelihood opportunities and economic assets, women have far less resilience than men to various shocks, such as natural disasters, climate risks, and economic downturns,” says the evaluation report’s main author, Hyun Son.

“Poor women typically lack the resources to protect themselves in case of disasters or restore their lives back to pre-disaster levels. Better social safety nets are needed for Bangladesh’s marginalized groups, particularly women, and this should be a priority area for development support,” says Son.

An important conclusion from the evaluation is that there was little focus in operations to get men to support gender equality. Gender issues are not just women’s issues. Men are important stakeholders in making progress toward gender equality, particularly in South Asia. “Men need to be involved in addressing gender inequalities and supporting women’s empowerment, lest they resort to violence in response to such empowerment,” says the evaluation. In its recommendations, the evaluation urges ADB to actively involve men in its advocacy and education campaign efforts on gender equality.