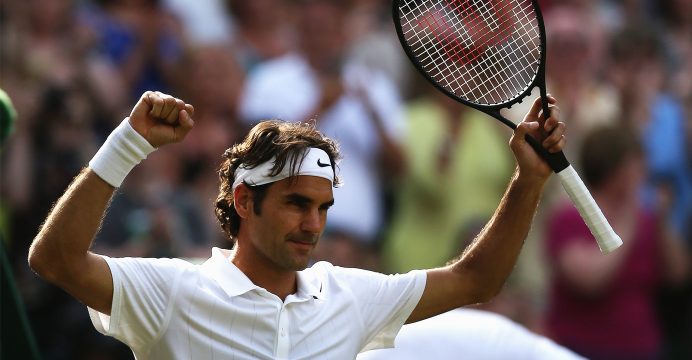 Roger Federer’s relentless pursuit of a record eighth Wimbledon title continued as he fought off stubborn Czech Tomas Berdych 7-6(4) 7-6(4) 6-4 to reach the final for the 11th time on Friday.

The 35-year-old Swiss was given his toughest test yet by the 11th seed, who beat him at the quarter-final stage in 2010, but he raised his game at the crucial moments to become the oldest men’s singles finalist here since Ken Rosewall in 1974.

Rosewall, then aged 39, went on to lose to Jimmy Connors but Federer will be a huge favorite to reclaim the title he last won in 2012 against big-serving Croatian Marin Cilic on Sunday.

Federer has now reached 29 grand slam finals and for the third time in his career has reach the Wimbledon final without dropping a set, having also achieved the feat in 2006 and 2008.

“I feel very privileged to be in another final,” Federer, who received a standing ovation at the end, said.

“I’ve got the pleasure to play on Centre Court another time. I can’t believe it’s almost true again. I’m happy to have a day off to reflect on what I’ve done at the tournament.”

Twelve months ago here Federer lost to Milos Raonic in the semi-finals – his legs looking heavy and the years finally appearing to catch up with him – but this year he has rolled back the clock in glorious fashion.