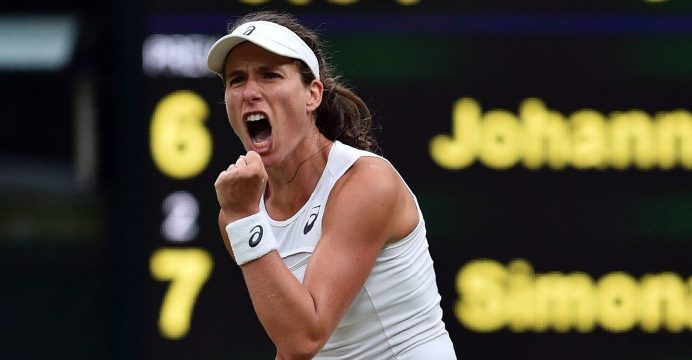 Johanna Konta has set her sights on Wimbledon history as the world number seven aims to become the first British woman to reach the final for 40 years when she faces Venus Williams on Thursday.

The 26-year-old is the first British woman to make the Wimbledon semi-finals since Virginia Wade in 1978 and a victory over five-time champion Williams would make her the first Briton into the women’s final at the All England Club since Wade won the title in 1977.

Born in Australia to Hungarian parents, Konta didn’t moved to the UK until she was 14, but regardless of her heritage she has been adopted as one of their own by the Wimbledon fans.

Now a resident of the sleepy seaside town of Eastbourne, the historic significance of her Wimbledon run, and the crowd’s reaction to it, has been an eye-opener for Konta, who until this fortnight could have walked unrecognised down any street in the country.

“I’ve dreamed of success in every slam but I think it makes it more special because it is home,” said Konta, who was ranked outside the top 150 only two years ago.

“I do get that home support, which I don’t get anywhere else. In that sense, I guess it makes it that much sweeter.

“In terms of the home support, I feel very excited and very humbled by it.

“When you get a massive crowd of people cheering, making that sort of noise in a stadium, you do get goosebumps.”

Having fallen in love with tennis when she was a young girl watching Venus and sister Serena dominate Wimbledon, it is fitting that Konta will have to vanquish her to reach the final.

“I think what Venus and her sister have given our sport is absolutely tremendous,” Konta said.

“The way they’ve elevated women’s tennis is truly inspiring. So I feel very excited and very humbled to be sharing the court with her again.”

Konta has never made a Grand Slam final, while Venus has been in 15, but the Briton doesn’t expect her rival’s extra experience to be a factor.

“I know this will be my second slam semi-final, but nerves and excitement and those sorts of emotions that come along with big matches aren’t necessarily specific to Grand Slam moments,” Konta said.

“I’ve been a part of some great moments and exciting moments in other events as well. I’d like to think I’ll be using all that experience come Thursday.”