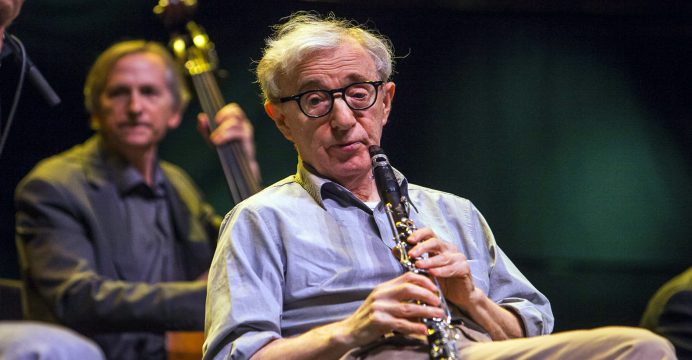 Topless activists interrupted a concert by Woody Allen in Germany, calling for an end to the “culture of silence” around sexual abuse allegations against the US director.

The German branch of the feminist group Femen posted a video on its Facebook page showing two activists mounting the stage during an appearance by Allen, who plays the clarinet, with his New Orleans jazz ensemble late Tuesday in the northern port city of Hamburg.

Their bare torsos covered in writing attacking Allen, the demonstrators shouted a passage from an open letter by Allen’s adopted daughter Dylan Farrow published in The New York Times in 2014 outlining her father’s alleged abuse when she was seven years old.

“They reminded the world and the the jazz-loving audience that Allen is not just a neurotic and charming director, musician and actor” but also an abusive parent, Femen Germany wrote.

In the video, the crowd can be heard booing the protesters as Allen, 81, is seen asking a fellow musician on stage what the women were shouting in German.

Security guards then yanked the women from the stage and the concert resumed.