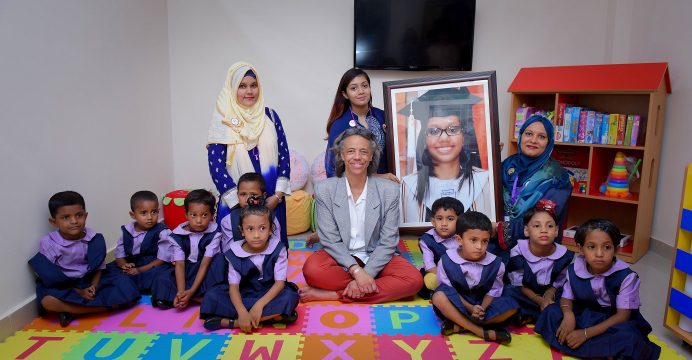 The model school of Abinta Kabir Foundation has been inaugurated in Dhaka’s Vatara on 5th July. The esteemed Ambassador of the United States of America, H.E. Marcia Bernicat inaugurated the school.

In her speech, Marcia Bernicat said, “I have to say the foundation and everyone who is working for it, specially Abinta’s mom, Ruba and everyone is very fortunate because Abinta left this amazing road map of what her dreams were and what she wanted to see done.

“And maybe in addition to bringing more students it would be really interesting to bring students who are inspired to be teachers here so they could be interns and work with the children”, she added.

Ambassador of the United States of America, H.E. Marcia Bernicat with the students of Abinta Kabir Foundation School

Abinta believed that to educate a family, we need to educate the mother and girls of the household first. Hence, Abinta Kabir Foundation School opens its doors for young underprivileged girls to give their dreams a fighting chance.

The Foundation also has five schools in Natore, which opened earlier in February this year. Furthermore, another school in Bashabo which is also going to start later this month.