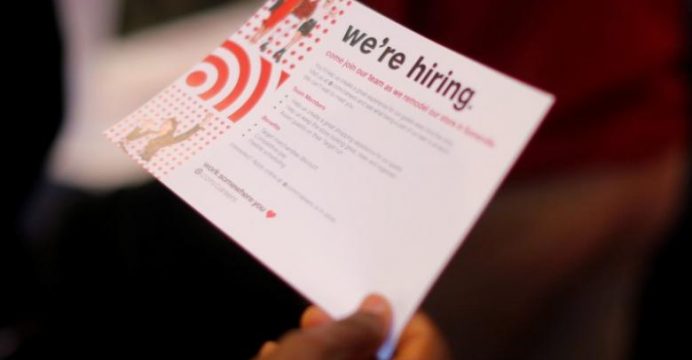 US job creation returned with a roar in June

US job creation returned with a roar in June, offering a dose of welcome news to the White House and offsetting fears of a slowing economy, official figures showed on Friday.

Still, the robust employment report came amid persistently sluggish wage gains while the jobless rate ticked higher — with more people returning from the sidelines to search for work, according to the Labor Department, reports BSS.

The US economic engine created another 222,000 jobs last month, far surpassing an analyst forecast for 173,000 net new positions, while the jobless rate rose a tenth of a point to 4.4 percent, according to the report.

The result came after several months in which other economic data suggested the world’s largest economy could be starting to lose steam. The jobs rebound also was sure to comfort Federal Reserve policymakers planning to hike benchmark interest rates later this year despite persistently weak inflation.

Gains in pay, however, were a disappointment and could fuel disagreements among Fed policymakers about the dangers of inflation.

Average hourly earnings rose four cents to $26.25, up 2.5 percent over June of last year — the same annual gain reported in May and just ahead of inflation.

The report revised May’s comparatively somber report, adding a net 47,000 jobs to the totals for that month and to April.

“The trend in employment growth remains more than strong enough to keep the unemployment rate trending down, which we expect will add to upward pressure on wages,” said Jim O’Sullivan of High-Frequency Economics.

“That said, for now, the wage data are tame enough to keep the debate about the relationship between slack and inflation very much alive.”

The labor force participation rate rose a tenth of a point to 62.8 percent, at a time when many US students and new college graduates began hunting for summer work. As more workers begin looking for jobs, that can push the unemployment rate higher.

Job gains were seen in health care, which added 37,000 new positions, financial services, which rose 17,000, and mining, which increased by 8,000 amid a modest recovery in the oil and gas sector since last summer.

The report brought monthly job creation so far this year to an average of 180,000, a little lower than the average of 187,000 recorded last year.

Nariman Behravesh of IHS Markit said the report overstated some of the vigors in the jobs market since an important part of June’s jump was due to a seasonal upswing in hiring by state and local governments — something that can also be tied to the end of the school year.

Still, he said, “the continued vitality of the US labor market means that the Fed is on track to begin shrinking its balance sheet in September and to raise rates again in December.”

The manufacturing sector — the key to President Donald Trump’s pledge to revive the economy — was little changed, adding just 1,000 new positions after losing twice as many the month before.

New positions among autoworkers fell by 1,300 in a sector that has seen sales dwindle after the record pace of 2016.  The share of people out of work but who had been seeking a job for fewer than 26 weeks dropped sharply, falling 18 percent to 948,000. But the ranks of the long-term unemployed edged up by 1,000 to 1.7 million.

Elise Gould of the Economic Policy Institute noted that among worker groups the jobs report contained good news for African-Americans, for whom the jobless rate has tumbled to 7.1 percent, down 1.5 points from the same month last year.