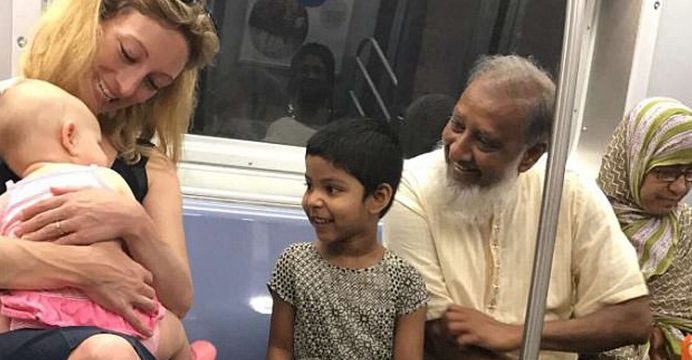 Over the holiday weekend of American Independence Day, a photo that people are saying is a representation of what makes America great has gone viral on social media. The heartwarming photo was also being shared as a multicultural symbol holding the ideals behind Independence Day

The image taken in a New York subway depicting a Muslim child of Asian descent grinning at an infant held by a white woman, who is also smiling has gone viral celebrating the Independence Day and the cultural diversity in America.

Taken today on the C Train. Thiiiiiis is what makes America great. Happy 4th of July, y'all. ❤️? pic.twitter.com/2b7Q89E2EI

The photo, shared on Twitter, has the caption, “Thiiiiiis is what makes America great. Happy 4th of July, y’all”.

MacKnight took the picture while she was riding the C train and the tweet has been shared more than 18,000 times and liked more than 69,000 times on Twitter.

Many Twitter users quickly took to the social media platform to celebrate the moment, saying they were proud to be American because of moments like this that welcomes diversity.