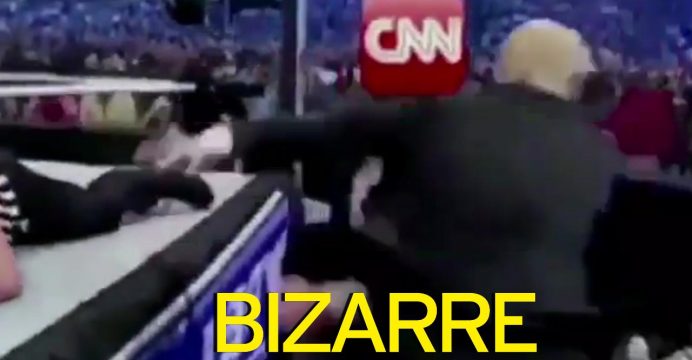 Trump Tweets a Video of Him Wrestling ‘CNN’ to the Ground

President Trump posted a short video to his Twitter account on Sunday in which he is portrayed wrestling and punching a figure whose head has been replaced by the logo for CNN.

The video, about 28 seconds long, appears to be an edited clip from a years-old appearance by Mr. Trump in WrestleMania, an annual professional wrestling event. The clip ends with an onscreen restyling of the CNN logo as “FNN: Fraud News Network.”

Cartoonish in quality, the video is an unorthodox way for a sitting president to express himself. But Mr. Trump has ratcheted up his attacks on the news media in recent days — assailing CNN and crudely insulting the hosts of MSNBC’s “Morning Joe” — while defending his use of social media as “modern day presidential.”

In a speech on Saturday at a faith rally in Washington, Mr. Trump was met with cheers when he referred to CNN as “garbage journalism” and said: “The fake media tried to stop us from going to the White House. But I’m president, and they’re not.”

The wrestling video, which was also posted to the official @POTUS Twitter account, stirred criticism, disbelief and dumbfoundedness. Some journalists denounced its portrayal of violence as dangerous, saying it could incite attacks or threats against news media employees.

“I think it is unseemly that the president would attack journalists for doing their jobs, and encourage such anger at the media,” said Dean Baquet, the executive editor of The New York Times.

The administration did not respond to a request for comment. Mr. Trump’s homeland security adviser, Thomas Bossert, defended the video when he viewed it for the first time during a broadcast interview with Martha Raddatz of ABC News. “No one would perceive that as a threat,” Mr. Bossert said. “I hope they don’t.”

A version of Mr. Trump’s video appeared last week on a Trump-dedicated page on the message board site Reddit, a popular meeting ground for some of the president’s most fervent supporters. The CNN logo is superimposed on what appears to be the head of Vince McMahon, a wrestling magnate and a friend of Mr. Trump, who in his prepresidential years often appeared as a guest on wrestling shows.

Mr. Trump’s fans on Reddit were exuberant about what they viewed as validation from the country’s most powerful man. “I love this,” wrote a user identified as American_Crusader. “You know he saw it, chuckled, and knew he could control the media narrative for days by hitting the ‘post’ button. So he did.”

The president’s allies say that his attacks on the news media are justified, arguing that the president is merely defending himself from coverage that his supporters view as biased. Mr. Trump’s war of words with CNN is especially popular with his voter base.

News media advocates, however, have raised alarms about a recent spate of arrests and assaults on working journalists, including a high-profile episode in which a Montana congressional candidate, Greg Gianforte, assaulted a reporter for The Guardian, breaking his glasses.

Groups like the Committee to Protect Journalists, which usually focuses on countries where reporters’ freedoms are curtailed, say they are concerned that Mr. Trump’s campaign-trail rebukes of news organizations are now being issued from the pulpit of the White House.