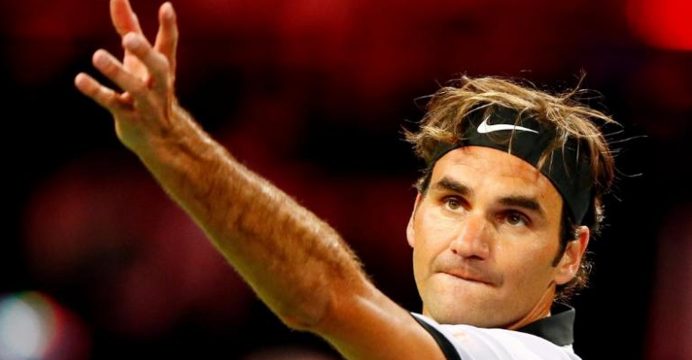 Roger Federer warned on Saturday that he and the rest of the big four of men’s tennis were going to be as tough to beat as ever at Wimbledon this year as they seek to continue their astonishing monopoly of the event, reports BSS.

In the last 14 editions, one of either Federer, the seven-times champion, double winners Rafael Nadal and Andy Murray, or triple victor Novak Djokovic has lifted the men’s singles title at The All England Club.

While reporters quizzed Federer on Saturday about who in the game’s young brigade could become the first man outside that quartet to win since Lleyton Hewitt in 2002, the Swiss felt it would be best to keep faith with the usual suspects.

Federer’s rivals have had mixed preparations for Wimbledon. Murray’s harboured hip trouble after an early exit at Queen’s, Nadal decided to skip grasscourt warm-ups to rest his body after winning the French Open while Djokovic burst into life earlier on Saturday by winning the Eastbourne title.

Do not be fooled, suggested Federer. All these 30-something luminaries would again be “tough to beat”.

“Depending how fit it is, if he’s anything close to 100 percent physically, I consider him (Murray) one of the big favourites to win the tournament. It’s that simple. It’s the same for Novak and the same for Rafa,” reckoned Federer.

“I think it’s very even when we put it all out on the line. Everybody has their own little story right now.

“Queen’s for Andy (where he was knocked out early) doesn’t matter so much because I feel like he’s one of the best players in the first week at Wimbledon, so I don’t worry too much for him there. He can play himself into shape for week two.

“Novak is just coming back from winning Eastbourne now. Rafa is coming in red hot from the clay. So I see it positive for them rather than negative in some shape, which I’m sure people will try to see that way.

“But I see that they are going to be tough to beat here.”

Federer himself seemed to have recaptured a touch of his fantastic early-season spark which saw him down Nadal in an epic Australian Open five-set final as he lifted his favourite pre-Wimbledon grasscourt title in Halle.

Yet the 35-year-old is too old a hand to insist that this is going to be a four-horse race.

“Yeah, it’s been very dominant by a few players here at Wimbledon. That’s surprising. It’s like that — but it can change tomorrow very quickly.”

It is not just the younger guns, headed, he says, by Milos Raonic, Kei Nishikori, Grigor Dimitrov, Alexander Zverev, Nick Kyrgios and Dominic Thiem who “are in a good spot right now where they can go very deep”.

“Then, I do believe the favourites are the other players. I include the likes of (Marin) Cilic into that, Stan (Wawrinka), guys who have done it before,” added the Swiss.

Nobody, of course, has done it before as often as the 18-time grand slam champion Federer himself, who admitted it “hurt” to miss out on competing on the sapping clay of the French Open when he knew he was fit and raring to go.

“No compromise really. I gave myself the best chance for the grass, so I would never look back and have regrets once I came here,” he said.

“Even though I was happy on the clay for a couple days, I just felt like, you know what, anything other than winning there feels like I’m not giving myself the best chance for Wimbledon.”